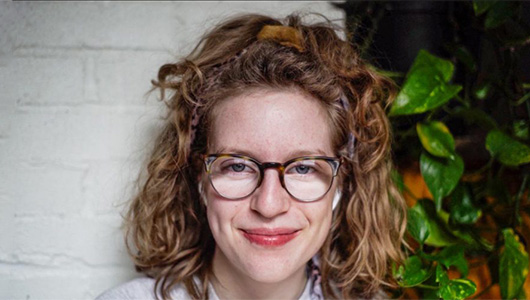 As a sophomore, Aydan Garland-Miner (’22) founded the WSU chapter of PERIOD, a nonprofit organization that provides support for those who face period poverty. Three years of events, workshops, emails, and distribution events later, she found herself on a Zoom call with members of the Washington State for Menstrual Equity Coalition, watching Gov. Jay Inslee sign House Bill 1273 into law.

“We hear about period poverty a lot; I think the way that we view people who are experiencing homelessness is very dehumanized,” Garland-Miner said. “I remember the first [distribution trip] being very emotionally intense.”

Beginning in the fall of 2022, H.B. 1273 requires free menstrual products be available in public and private school bathrooms across the state.

It all started when Garland-Miner, a double major in women’s, gender, and sexuality studies (WGSS) and and broadcast production, read Period Power: A Manifesto for the Menstrual Movement by Nadya Okamoto, the founder of the PERIOD organization. It peaked her interest in the history of periods, period stigma, and period poverty,

“I noticed that the University of Washington had a [PERIOD] chapter, and we didn’t, so I decided to look into starting one,” she said. In addition to recruiting fellow students and organizing the new chapter, she served as the student club president from March 2018 to August 2021.

Throughout her time with PERIOD, Garland-Miner has spoken at events and led workshops to spread awareness and reduce the stigma of periods. She also helped the group create period packs—a set of menstrual pads, tampons and other products—and led distribution of the packs to homeless individuals in Spokane and in Pullman and Moscow.

When preparing for a distribution trip to Spokane in April 2021, the group assumed there would not be as many homeless people on the streets because of the COVID-19 pandemic. Unfortunately, it was not the case.

“It seemed like there were so many more [homeless people] than we had ever seen. We ran out of period packs, which we had never done before,” Garland-Miner said. “COVID was a huge concern, not for us necessarily, but for people that are living on the streets.”

“She had a lot of…big ideas,” said Alexa Branch (‘XX), former PERIOD at WSU vice president and co-host of many club activities and outreach events. “Aydan is an incredible human being. It’s an inside joke that whenever we catch up, it’s like she’s won six more awards or something, and she mentions it super nonchalantly.”

One of Garland-Miner’s most notable successes is spearheading the HB 1273 legislation.

To generate interest outside of WSU, she co-founded the Washington State for Menstrual Equity Coalition along with her friend Agatha Campana Tutia. Together they recruited members, connected with advocates from different equity organizations, and worked with State Representative April Berg to draft HB 1273. Once the bill was introduced to the state legislature, Garland-Miner rallied supporters and prepared to provide testimony.

“I had talked on my Instagram about inviting people to come to the Zoom [hearings] and then helping them write emails to their representatives in their district to urge them to support the bill,” she said.

Once the bill passed with bipartisan support, Garland-Miner said she felt happy, as did everyone else who provided testimony or supported the legislation. Emotions ran high during the governor’s signing ceremony and the coalition celebrated the impact the bill will have on young girls and women.

When she isn’t doing activism work, she enjoys reading and spending time in Kimbrough Hall and the Chinook Student Center to practice piano and sing.

Garland-Minor joined Period. Inc. as a northwest regional lead to help chapters in Washington, Oregon, Montana, California and Alaska eradicate period poverty and stigma, and continue working to get more funding for HB 1273.

After graduation, she said she will move back to her hometown near Bellingham, Washington, where she hopes to work at College Advising Corps, which helps high school seniors get into college.

Adapted from a story by Puneet Bsanti in The Daily Evergreen