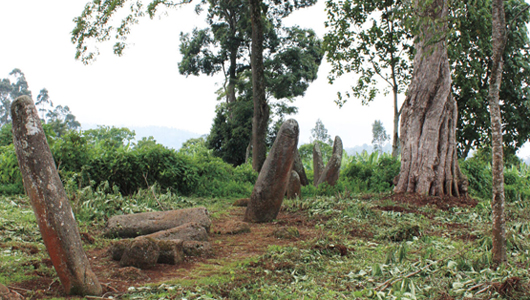 Scattered across southern Ethiopia are thousands of mysterious stone monoliths rising as high as 20 feet.

“We don’t know who built the stelae in southern Ethiopia or why,” says Addisalem Melesse, a WSU doctoral student in archaeology. “However, the research we are doing at WSU is starting to shed light on the monument’s history and the people who built them.”

Under consideration as a UNESCO World Heritage Site, the region, known as the Gedeo Zone, has the largest number and highest concentration of the monuments in Africa. Many of the monoliths, or stelae, have fallen. While many appear undecorated, a few have intricately wrought faces and other anthropomorphic designs carved into the stone.

But perhaps the most intriguing aspect of the megalithic stele sites is how little is known about them.

Melesse worked for the Ethiopian Department of Archaeology and Heritage Management and as an archaeology lecturer at Ethiopia’s Hawassa University before coming to Pullman in 2017 to pursue his doctorate.

Last fall, he was part of a WSU research team that found that stelae at the Sakaro Sodo archaeological site were likely created during the first century CE, a thousand years older than previously thought.

Now, he is working with Andrew Duff, WSU archaeology professor and chair of the Department of Anthropology, and the Ethiopian Department of Archaeology and Heritage Management to determine how to manage the stele sites better.

“Two of the big challenges of preserving the sites are population pressure and development,” Melesse says. “We are trying to come up with ways where conserving the stones actually benefits the people whose land they are on.”

This population growth makes land a precious commodity, and some stelae are being torn down to make way for agriculture or development.

To address this challenge, Melesse and his collaborators are proposing a system where revenue from visitors to the sites would be given back to the people whose land is occupied by the stones.

“While the largest stele sites are fairly well protected and fenced, there are a lot of smaller clusters of the stones and individual isolated stones that are being torn down,” Melesse says.

Another local revenue generator for communities could be construction of heritage centers in villages near the stele monuments that could serve as regional museums and provide a place for local goods and crafts to be sold to tourists.

While the project has been slowed due to the COVID-19 pandemic, Melesse and his collaborators hope to begin implementing their plans in the next couple of years. Their ultimate goal is to develop the Gedeo Zone into more of a tourist destination for Westerners.

“In terms of archaeology, cultural and ethnic diversity, Ethiopia is just a totally fascinating place to visit,” says Barry Hewlett, a WSU Vancouver anthropology professor who has been working in Ethiopia for more than a decade.

Hewlett played a key role in establishing the relationship between WSU and several universities in Ethiopia that has made much of the recent conservation work and research at the stele sites possible.

He originally went to Ethiopia on a Fulbright fellowship in 2010 with his wife Bonnie Hewlett, also a WSU anthropology faculty member, to teach and conduct research. Since then, Hewlett and WSU have established formal relationships with Hawassa and Arba Minch Universities in Ethiopia. Now, in part due to WSU connections, Hawassa offers its own doctorate in archaeology and the WSU Department of Anthropology has more anthropological research taking place in Ethiopia than any other US university.

By Will Ferguson for Washington State Magazine