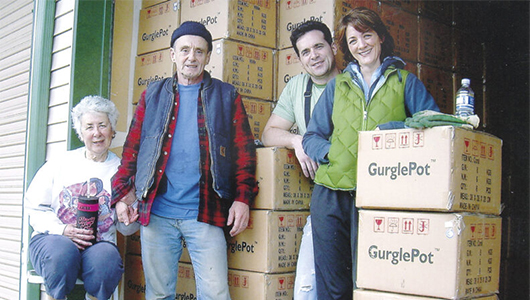 Never underestimate the power of an elective, advises  Matt Ellison (’92 business) and GurglePot founder. “It gets people out of their comfort zone,” he says. “That’s the beauty of going to college and broadening your knowledge. At some point in life that random class could become the most important one you ever took.”

For him, it was introductory sculpture.

The pitcher, in the shape of a fish with its tail curled up behind its head, was charming enough. Then there was the fanciful sound of water laughing as it poured from the pot.

“We just fell in love with it,” says Matt Ellison, who earned his WSU degree in hotel and restaurant administration.

He and his wife, Jennifer “Jen” (Dembiczak) Ellison (’90 Busi.) were in France for a family wedding when they first encountered the novelty pot, an antique work of functional folk art. Gluggle or glug-glug jugs date to at least the mid- to late-nineteenth century. Their signature gurgling sound is produced when air trapped in the pitcher’s hollow, fish-tail handle releases as the vessel returns to an upright position.

When the Ellisons first saw⁠—and heard⁠—one in October 1995, they were delighted by its inherent whimsy. They were staying in a village south of Dijon. They didn’t speak French. And their host family didn’t speak English. To help fill long silences during dinner, Matt found himself repeatedly refilling his water glass to unleash the giggling sound of the gurgling pot⁠—and smiles from everyone at the table.

Back home in Western Washington, he says, “we couldn’t find any similar pots being sold in the States, so I decided to make my own.” Matt designed a contemporary rendering of the vintage pitcher.

Matt created the prototype for GurglePots at the kitchen table, drawing on mold-making skills he learned in an elective sculpture class as a college freshman. “It’s funny how they almost didn’t come to be. I sculpted the positive and made it into a negative to make the plaster mold, and I learned how to do that through a WSU class,” taught by sculptor Jack Dollhausen, now a professor emeritus of sculpture.

Since then, the Ellisons have sold more than a million gurgling, fish-shaped pitchers. Their GurglePots are available in the United States, Canada, and Australia. Last year, they were featured on the New York Times lists of “31 of the Best Housewarming Gifts” and “The 71 Best Gifts Under $50.”

Top-selling colors are cobalt, aqua, white, and bright red. And “I Spy” moments keep getting shared by fans on GurglePot’s Facebook page. A peacock blue GurglePot appeared on the shelf behind Stephen Colbert when he was hosting The Late Show from home early in the COVID-19 pandemic. Another GurglePot appeared in the fourth episode of the PBS series Dishing with Julia Child. Still another appeared in season four of the Hulu original series The Handmaid’s Tale. And, on January 15, actor Mandy Patinkin commented “My favorite thing” and “Is there any better invention?” on an Instagram video of himself using a GurglePot.

Matt shelved the project for 10 years while the couple, who met at WSU and dated throughout college, raised their boys, then a toddler and a baby. When Matt’s dad was cleaning out his garage, he found the original sculpture and mold, and asked him what he should do with them.

“The kids were older so I had more time to work on the pot,” says Matt, who fashioned a few more molds by hand before perfecting the design. “I was doing it all by eye. I didn’t do it with CAD,” computer-aided design. “Now you could use 3-D printing to create it and make it.”

He glazed and fired the first one at a U-paint pottery shop. Unlike vintage versions, which typically feature intricate fish scales and other ornate details, his embraced clean lines and a smooth finish.

The GurglePot got its “big break” in 2006 at a gift show at New York City’s Javits Center, says Jen, whose background is in marketing and publicity. “An editor from Coastal Living stopped by and did a story on us, and it just kind of exploded from there.”

So many orders came pouring in that Matt had to quit his job in agricultural sales with no notice. Two more WSU alumni⁠—Matt’s mom and dad, Russell Ellison (’65 DVM) and Lanita (Nutt) Ellison (’62 Ed.)⁠—helped package pots in the Ellisons’ Lake Tapps garage to meet demand.

Today, GurglePot has a warehouse and office in Pacific and a team of about six employees. Most sales come from the nearly 2,000 small, independently owned boutiques across the country that carry and demonstrate the product. “It makes people smile when they try it out,” Jen says⁠—just like it did for her and Matt in France nearly 30 years ago.

Matt’s creativity didn’t stop with the GurglePot. More recently, he designed another sound-making culinary product: a bird-shaped wine-bottle topper that makes a “chirping” sound while pouring. His patented ChirpyTop hit the market in 2015.

His advice: Never underestimate the power of an elective. “It gets people out of their comfort zone,” he says. “That’s the beauty of going to college and broadening your knowledge. At some point in life that random class could become the most important one you ever took.”