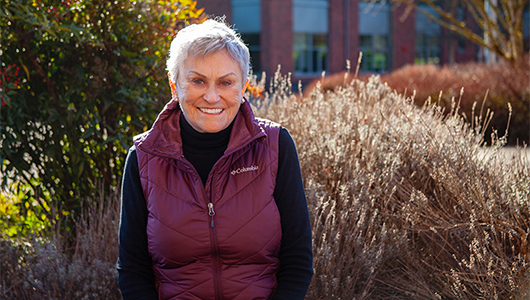 Three years ago, Marilou Cassidy, then 78 years old, decided to give herself an 80th birthday present: a college degree. She had earned numerous college credits over the years and WSU Vancouver was just 15 minutes away from her home. Even so, “It took me three or four months and a lot of nerve to go in and apply,” she said.

After high school in Vancouver, where she grew up, Marilou attended Clark College for two years. “I wanted to be an airline stewardess, and they required two years of college. I went on to be a stewardess for United,” she said. “It was glamorous and lots of fun. I was based in Chicago and Seattle, and in Seattle I met Larry.”

When she married Larry Cassidy, she had to give up her job—at the time, United required that stewardesses be single. So she became a homemaker and mother to three children: Erin, Lynn and Michael. All are now grown and on their own and have given Marilou and Larry 12 wonderful grandchildren, she is proud to say. Larry and Marilou lived first in Seattle, then moved to Vancouver, where he ran his own plumbing supply business based in Portland, Ore. A University of Washington graduate in business, he is now retired.

“I’ve always been a student,” Marilou said. “I’ve taken sewing classes, cooking, photography, art, whatever, so I had other credits.” She often took classes at Clark College and Marylhurst College, once even registering in the degree program in fine arts at Marylhurst. The news in 2018 that Marylhurst was closing surprised her into thinking about going back to school to take advantage of the 64 credits she had earned up to that point. She chose WSU Vancouver because it was closer.

“I have a lot of energy, I’m healthy, I have financial means, we weren’t traveling as much as we used to, so I thought this is a good place to put my energy,” Marilou said.

She has taken classes every semester, starting with the 2019 Global Campus summer session. She has taken required classes (like biology) and classes she felt passionate about (like fine arts and history). Thanks to other students who jumped in to help her, she has learned to master academic technology, such as Blackboard and Canvas and Zoom. She has done research papers with citations— something she definitely did not enjoy. She never let up, despite knee replacement surgery in spring 2021. “We were on Zoom, so that worked great,” she said. “Otherwise I would have had to drop out.”

Her experience as an older college student has been overwhelmingly positive. “I’ve never, ever felt out of place,” Marilou said. “I’ve been welcomed in every class, and there are a lot of times [other students and teachers] have thanked me for sharing. I felt so accepted, and whenever I had issues, they’d jump in and help me. Especially biology. I’m not a science person, and the girls at my table were so helpful.”

She praises all of her professors as well. “All have been outstanding—their knowledge, their helpfulness.” She invested her time and energy into being a good student. “I know there are lots of clubs and activities [on campus],” she said, “but I’ve just put my head down and gone to class. No one ever made me feel out of place. That’s the way the campus is—the student body is so diverse.”

As the reality of her degree drew closer, Larry said he wanted to give Marilou something special for graduation. “I said, let’s give back to the school,” she recalled. “That’s why we decided to do the scholarship.”

They worked with the Office of Development and Alumni Relations to create the Marion L. Cassidy Endowed Scholarship (although she prefers Marilou, her actual name is Marion Louise). The first scholarship from the endowment will be awarded for academic year 2023/24. The scholarship is designed for students with a GPA of at least 2.5 and carrying at least 9 credit hours, with a preference for humanities majors and returning students.

Marilou got the idea simply by observing the other students in her classes. “I saw these kids going to their jobs at night and back to school in the morning,” she said. “It’s something I could not have done.” She says she couldn’t have done it at all without Larry, whom she calls her “strongest supporter. I didn’t tell him I was going to get my degree till I got the acceptance letter,” she recalled.

Larry thinks he got the best of the deal. “I think it’s wonderful what she’s doing,” Larry said. “For example, she asked me to review a paper she’d written on current social issues. It was 10 pages. I read to the fourth page and gave it back and said this is beyond my capability; this is really good work. It was fantastic to watch her educate, watch her grow. I see her emerging as a stronger person for the rest of our lives. So I feel very lucky.”

For her part, Marilou is looking forward to dusting off her Canon camera and getting back to her photography hobby. As the sixth WSU Cougar in her family, she is also excited about becoming an official member of the Cougar alumni family.