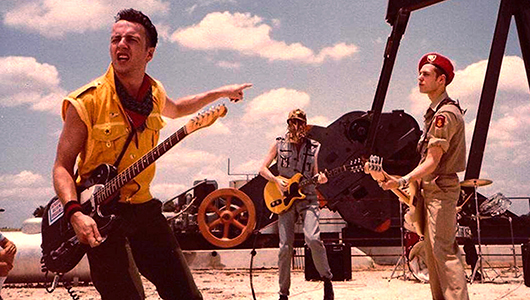 In his Politics of Developing Nations summer course (Pol_S 400), Richard Elgar begins each class with a pop music song whose lyrics apply to the lesson’s subject matter.

“The Clash appears quite a lot, like ‘Rock the Casbah’ when we look at the Middle East,” said Elgar. “Also songs like ‘Zombie’ by the Cranberries when we consider conflict, or ‘Bangla Desh’ by George Harrison when talking about aid, or Manu Chao while we discuss globalization.

“Starting off with a song is a way to make it memorable for the students. It also sparks classroom discussion and gets everyone talking.”

The course explores the effect that globalization has in politics around the world, especially as it relates to nations struggling to rise up the ladder of economic and social development.

Billions of people around the world live on less than $10 per day—and almost half the world’s population lives on less than $2.50 per day. Why are some countries in turmoil, while others are peaceful? Some authoritarian and some democratic? What explains the enormous differences between nations, both in terms of economic growth and political stability?

“We talk a lot about how everything is connected, and how the decisions that one nation makes can have a domino effect, impacting other nations in a wide variety of good and bad ways,” said Elgar, an assistant professor of political science who has taught the class for 10 years. “We also focus on inequality in economic relationships between nations, giving a snapshot on current events and how they influence the developing world.”

The political science course is open to all students regardless of their major. Students interested in international development, comparative politics, world history or sustainability will likely find the content particularly compelling.

“There are a lot of concepts that students won’t have touched on before, even those who have been studying political science for years,” said Elgar, “And although there’s a lot of reading, which can intimidate some people, those articles and chapters are all very engaging.”

Role-playing exercises and projects add a personal perspective to the learning environment.

“I assign each student a nation and ask them to learn about that nation and put themselves in its shoes, so to speak,” said Elgar. “Then, as their assigned nations, the students can interact, and it can get really interesting.”

Student feedback over the years has been very positive:

“This course still reigns as one of my favorite courses I have taken at WSU. I really enjoyed our final project where we chose a developing country and explored its history in depth and made predictions about its future development,” said undergraduate Emma Ekman.

In addition to the Global Campus five-week summer session section, Pol_S 400 is offered in-person on the Pullman and Vancouver campuses during the academic year. Each section focuses on a different topic. For example, in the fall 2022 term, the Pullman sections will study the 2022 election, Indigenous peoples in leadership and politics, and the death of democracy.