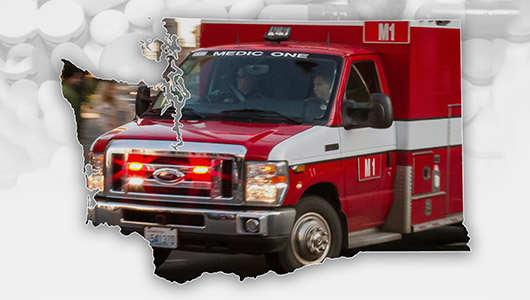 opioid use cuts across socio-economic boundaries, WSU researchers have found racial and ethnic minorities in Washington state are more likely to die from an overdose earlier in their lives than non-Hispanic white residents.

“This work confirms the epidemic is far reaching and having dramatic impacts on quality and length of life for Americans of all walks of life,” said Justin Denney, associate professor of sociology and co-author of the study published in the Journal of Substance Abuse Treatment.

Using data from the state’s Department of Health, researchers analyzed more than 5,200 records of opioid-associated deaths from 2011 to 2018. They found that racial and ethnic minorities died from opioid overdose on average from ages 33 to 44. For non-Hispanic whites, the average age of death was 45.

“We found that racial and ethnic minorities in our state, including American Indians, Alaska Natives, Blacks, Hispanics, Asians, Native Hawaiians and other Pacific Islanders, all died at a younger age as a result of an opioid overdose compared to whites,” said Solmaz Amiri, a researcher with WSU’s Institute for Research and Education to Advance Community Health (IREACH) and lead author.

For some minorities, such as Hispanics, the gap in years of potential life lost compared to whites was 6 years while for others, such as Blacks, and American Indian and Alaska Natives, it was 1-3 years. Even a few years represents a big difference since these are averages and racial misclassification is prevalent on death certificates, said Amiri, who is also an assistant professor with WSU’s Elson S. Floyd College of Medicine (ESFCOM).

The research team found that educational and marital status did have a moderating factor. More educated people and those who were married led longer lives on average than those who did not. However, their lives were still shorter on average than their white peers.

Proximity to treatment also mattered with those living within five miles of an opioid treatment program living longer on average. Currently in the U.S., opioid users in recovery have to go to a treatment site daily, in-person for the first several months of treatment to receive methadone, a drug that helps reduce withdrawal symptoms. This daily requirement can be a major obstacle for those who live long distances from a program. Other countries such as Canada and Australia allow pharmacies to distribute methadone, which could give underserved groups better access to treatment, Amiri said.

The authors said the findings show an urgent need for action. The first step is to get a better understanding of how many people are dying from opioid overdose, which can be challenging to capture even from mortality databases due to racial misclassifications and unclear links to opioids use.

The research team is currently analyzing state-level data from the years of the COVID-19 pandemic, a time when opioid-related deaths rose across the nation. The pandemic also appeared to exacerbate disparities: American Indians and Alaska Natives continued to have the highest rates of overdose deaths, but during the pandemic, for the first time in decades, Blacks surpassed whites in rates of opioid-overdose related deaths.

“While some things in our study may be related to Washington specific features, the general pattern of disproportionate burden on racial and ethnic minorities in terms of years of life lost is quite likely similar across most if not all of the U.S.,” said Denney.

Solutions to the opioid crisis and its associated racial and ethnic disparities will require culturally tailored efforts from a wide range of organizations, the researchers wrote.

“As suggested by the Centers for Disease Control and Prevention, there has to be a collaboration among the federal government, states, tribal communities and local health departments to address this opioid overdose epidemic,” said Amiri “If they don’t support each other and come up with a plan, nothing is going to happen.”