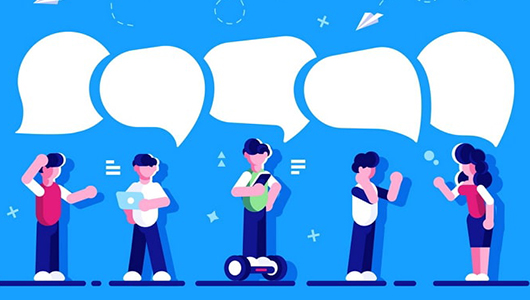 In humans and non-humans alike, physical contests are a well documented form of competition when it comes to scarce resources such as food, territory, sex, and power. Humans, however, have developed a more subtle, and now more common, approach: informational warfare. One of its primary manifestations is gossip.

While it may not physically batter or kill rivals, gossip can do great damage. “Those with better reputations often obtain more resources than those with poorer reputations,” writes WSU anthropologist Nicole Hess. “Consequently, gossip might be an evolved strategy to compete for valuable and scarce material and social resources.”

Hess began studying gossip and other forms of informational warfare as a graduate student at the University of California at Santa Barbara more than 20 years ago. She developed “informational warfare theory” as part of her dissertation, a study of how women use gossip to undo harm to friends’ reputations and bring harm to the reputation of a friend’s accuser or rival, typically someone outside their own group. Since then, she has studied gossip in humans from small scale hunter-gatherers, to online international populations, to college sororities.

The paper is the most recent of a series Hess has written on gossip as a form of competition, delving deeper and deeper into her theory. In “Competitive gossip,” she presents findings showing that gossip is specific to the context of the competition (such as within a family or a club); that gossip, particularly negative gossip, is greater when the stakes are higher (e.g., desired resources are more valuable and scarce); and that allies or close friends tend to deter negative gossip about a member of their own coalition, or group. Within one’s group, one is more likely to use gossip than physical aggression, she said, because group members help to keep each other physically safe so they can fulfill their roles within the group.

The stereotype that women gossip more than men, while men are more likely to use physical force, has interested Hess since the beginning. But men do gossip, she said, and she’d like to understand when and why, and what its evolutionary purpose is.

Her next project involves an experiment to determine when both men and women use gossip over physical aggression. The questions she wants to address: Is it a sex difference that explains this? Or the difference due to whether the opponent is a member of your community versus another community? Also, she said, “I do think women’s gossip is different from men’s. The bulk of it is figuring out what happened, not spreading it. Men, while bragging, will tell the same story multiple times.”

Hess’s interest dates back to watching her mother and grandmother gossip. “The way they could spin a tale about what the neighbors must be doing was impressive,” she said. Over the last 20 years, however, her research has taken a backseat to the rest of her life. Besides her job at WSU Vancouver, she has been busy raising two daughters, now 12 and 16. But she is looking to the future when she’ll have more time to continue her investigations into the nature and uses of gossip.

Meanwhile, the validity of her theory about informational warfare is ever more apparent. Consider reality television and social media, for example. “About a year ago I started watching the Real Housewives shows,” she said. “Somebody will say one word [of gossip], and there are episodes and episodes based on that one word.” And people often use social media like Facebook to make themselves look better—arguably a form of gossip designed to be shared. “In that way,” Hess said, “you’re spreading positive information about yourself and your reputation.”

The paper, coauthored with Ed Hagen, professor of anthropology at WSU Vancouver, appeared in Philosophical Transactions of the Royal Society B in the fall of 2021.