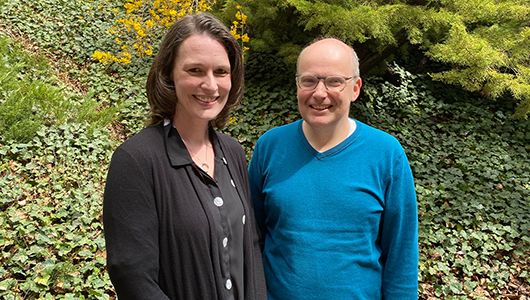 Around 800 people in the United States received a Fulbright U.S. Scholar Program award for 2022-23. Two of those are married Washington State University professors: Travis Ridout in the School of Politics, Philosophy, and Public Affairs, and Carolyn Ross in the School of Food Science. “We were expecting neither of us to get a Fulbright; we hoped one of us would get it,” said Ross. “We didn’t think there was a chance we would both receive one. But here we are and we’re excited.”

Ridout and Ross will spend the first six months of 2023 in Australia working on separate projects primarily funded by the U.S. Department of State program.

“There’s tremendous prestige applied to the Fulbright Program,” Ridout said. “We’ve had colleagues receive them and they talked about what a great experience it was. Part of the program is acting as cultural ambassadors for the U.S., which our family won’t take lightly.”

The couple have three children, ages 14, 11, and 9, who will re-locate with Ross and Ridout from Pullman to Melbourne.

“They’re excited and nervous,” Ross said about her offspring. “Living in a large city will be a good experience for them.”

The couple chose Melbourne, Australia’s second largest city, because both have colleagues in the city with whom they’ve worked in the past.

“I think Australia is a window into our future, as far as digital political advertising,” Ridout said. “They are really ahead of the rest of the world in this.”

He also wants to look into policy implications of unregulated digital advertising, which is mostly the case down under.

“We’re struggling here in the U.S. with how to regulate digital political ads,” Ridout said. “Australia is similar in that digital political advertising is lightly regulated, but that may change soon with a newly elected government. Living there is a good way to examine the implications of those policies.”

Ross visited Melbourne in 2019 to work with a fellow food scientist on a project involving children and food textures. She plans to further work on that subject in 2023, including looking at food textures and children with Down syndrome and other intellectual disabilities.

“We’ve developed a questionnaire that parents can use to see if their child is sensitive to food textures,” Ross said. “We’re also going to look at various foods that practitioners in Australia recommend for texture-sensitive children.”

Both professors will be on sabbatical from their WSU faculty positions, allowing them to focus on research, experiencing another country, and learning.

“It’s something new, allowing us to get refreshed,” Ross said. “It’s a great way to invigorate ourselves as we learn more about work being done in our fields.”

Started in 1946, the Fulbright Program has provided more than 400,000 participants from over 160 countries the opportunity to study, teach and conduct research, exchange ideas, and contribute to finding solutions to shared international concerns.