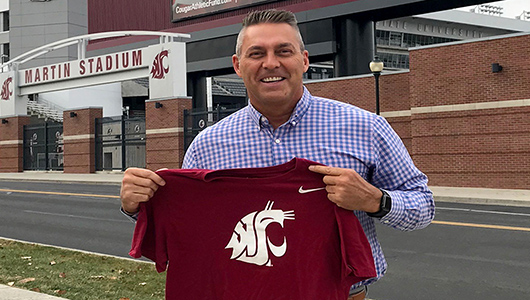 As a high schooler, Gary Rubens (’22 Psych.) could scarcely pay to put gas in his car. He filled out college applications, not because he had a strong passion for any particular field of study, but because it was what his friends were doing.

“Back then, I just didn’t have the right information on the financial costs of attending college,” said Rubens, explaining that in 1981 he was accepted to Washington State University but his family couldn’t afford it.

Now a successful investor and philanthropist who has helped thousands of financially challenged Washington residents afford college, Rubens has finally become a college graduate himself. He crossed the stage at Beasley Coliseum on the Pullman campus in May and several of his fellow grads who have received scholarship help from his foundation were right there with him.

“This is the culmination of a lot of work,” Rubens said. “Many of my friends and family have seen me doing the work or heard me talking about the classes I’ve been taking, and so them being with me this weekend will be the best possible end to this long journey.”

Back in 1981, Rubens found himself entering the workforce and relying on blue collar mechanical skills he’d picked up from vocational and technical college courses. He eventually built a successful online lighting supply company that was bought by home improvement retail giant Lowe’s.

But he never forgot his past.

Despite the family’s financial struggles growing up, Rubens’ mother found ways to be generous, inspiring her son to follow the same.

“We would be struggling and she’d always find ways to help others,” Rubens recalled. “I didn’t recognize as a kid but do now, and so I have to do something else with this blessing, which is to help students like me.”

After the sale of his company, ATGStores, Rubens met with friends and colleagues to talk about how to invest in the wellbeing of students while helping to meet the needs of employers in the region. In 2013, Rubens established the Rubens Family Foundation to meet this goal. Soon after, he met Barry Goren from the College Success Foundation and learned that there were others in the state working towards the same goals.

Goren told Rubens that CSF had already given out its scholarships for the year. Rubens asked if there were any deserving students who missed out, and Goren said there were. Rubens donated $1 million to test the waters, leading to CSF granting additional scholarships to students who thought they’d missed out.

Shortly thereafter, Rubens learned about the Washington State Opportunity Scholarship, a public-private partnership that saw the state matching donated dollars to support financially disadvantaged students. Since 2015, Rubens has given WSOS more than $31 million, making him one of the program’s biggest supporters.

“Gary specifically targeted dollars to students from lowest economic background,” Jessica Monger, external affairs director for WSOS, said.  “With his first gift in 2015, we named 3,400 Rubens Opportunity Scholars pursuing bachelor’s degree and another 300 enrolled at career and technical colleges. The recent reinvestment from Gary and his wife Jennifer in 2021 will enable more than 1,800 additional scholarships to be awarded, bringing the total number of students who will benefit from Rubens’ generosity to more than 5,000.”

WSOS started in 2011 by supporting students pursuing bachelor’s degrees in high demand areas like STEM and healthcare. Since then, the program has expanded to support students enrolled at career and technical colleges as well as trade programs. They’ve also launched a brand new program this fall for students working toward becoming nurse practitioners.

Rubens talks about his contributions to WSOS as an investment, something he hopes to see a return on in the form of students who earn degrees, get good paying jobs and support their families and communities in ways they wouldn’t be able to without a college education.

“It’s not about how many students get into college, it’s how many come out with degrees, with a goal of employment in a life sustaining job,” Rubens said.

In the midst of supporting scholarship programs, the idea of attending college came back into Ruben’s mind. His children attended the University of Washington, and he himself sat on the advisory board of UW-Bothell.

Ultimately, Rubens opted to go with WSU Global, closing the loop opened in 1981 with his original acceptance. His friends and family razzed him about going back to school and where his allegiances come gameday would lie, but the support was unanimous.

Rubens chose to focus on psychology and sociology courses, pursuing a greater understanding of human beings and what drives their behavior. It’s a field of study his high school self would be completely baffled by.

“High school me would definitely be surprised by what I chose to study,” Rubens said. “I don’t know if I knew at the time what psychology was.”

The coursework was rigorous, and it took Rubens time to get used to the amount of reading and coursework required. His philanthropy, service on various advisory boards and investments meant he had to make adjustments to his course load, but he stayed on track by taking online classes during the summer semesters.

Rubens was in Pullman to walk during spring commencement and WSOS scholars are set to do the same thing at ceremonies all across the state. Prior to the pandemic, Rubens would host events near campuses to meet students and their families, something he hopes to start doing again so.

“It’s really fun to meet the students, and their families, and I’m definitely planning on resuming it soon,” Rubens said.

Top photo: Gary Rubens, who was accepted by WSU in 1981, earned his undergraduate degree in 2022 after finding success in the business world and moving into philanthropic work.