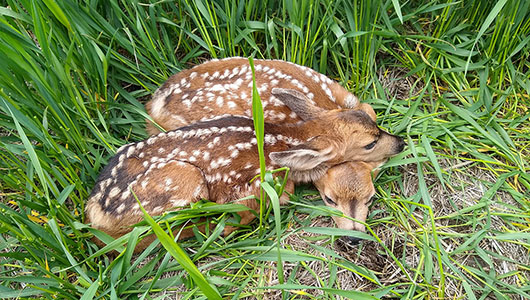 Trekking through grasslands in southeastern Washington, Rebekah Lumkes, a School of the Environment master’s student, swept her radio antenna back and forth a few times, quickly homing in on a telltale tone. Moments later, a mule deer doe, radio collar number 877, bolted from cover and bounded down the gully. Lumkes backtracked to the doe’s estimated starting point, then began quartering the area, looking for the fawn born two nights prior.

“Mule deer are an indicator species,” Lumkes said. “They’re sensitive to changes in habitat—especially their cover and forage—that agriculture and development have brought to the West.”

Huge-eared and inquisitive, mule deer are an iconic species found just about anywhere there’s vegetation in the Western U.S. Their natural habitat has been substantially altered by agriculture, and in some areas, the species’ numbers have declined.

Lumkes and her advisor, Professor Lisa Shipley, are studying the link between changing habitats and fawning locations — sites where baby fawns are born and cared for by does. A three‑year grant from the Washington State Department of Fish and Wildlife supports surveying habitat at fawning sites for 30 radio-collared does from Walla Walla to Clarkston, Washington.

“I look at the habitat they’re choosing, and especially where they are giving birth and hiding their fawns,” said Lumkes. “Fawn survival is what drives population. If you have a lot of fawns surviving, your population will go up. If a lot are dying, population will go down.”

During fawning season, May through July, Lumkes seeks just‑born fawns in the field. In a typical excursion on a cloudy June day, she navigated knee‑high grass in a low canyon splitting wheat fields near Pomeroy.

Newborn fawns are tiny, weighing only about six pounds. Their spotted coats perfectly camouflage them, and they remain curled and quiet when mom is away. To find them, “you have to be practically on top of them,” Lumkes said. “Some days we get skunked. We don’t always find them.”

When Lumkes locates a fawn site, she measures the height of cover at the site and nearby, notes the types of vegetation, features of the landscape, and takes photos. She’ll use that data to get a clearer picture of how land use practices affect where fawns are born and raised.

In the last few decades, many farmers in southeastern Washington have begun conservation programs to restore sensitive lands to grass and shrub. Scientists like Lumkes and Shipley at Washington State University want to know how the combination of agriculture and restored fields affect mule deer populations.

One of the questions that Lumkes seeks to answer is how much mule deer rely on habitat in the federal Conservation Reserve Program, which sets aside environmentally sensitive lands from farming.

“Do they need these pockets to survive?” she asked. “If so, we could encourage more conservation to make sure there are areas for deer and other species.”

“They’re a beloved species, an important game animal, and as large herbivores, they play an important role in the ecosystem, linking plants to predators,” she said. “What happens to them has a lot of implications for a wide range of wild species, from native plants and insects to many species of birds and mammals.”

Top photo: One-day-old mule deer fawns stay low and quiet in cover in southeastern Washington. The fawns were photographed this spring by WSU student Rebekah Lumkes, studying fawning habitat through a project with the Washington State Department of Fish and Wildlife.

By Seth Truscott for WSU Insider