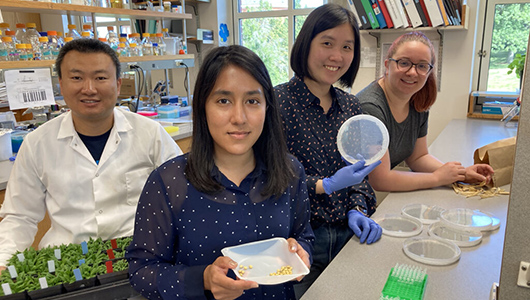 Funded by a $300,000 award from the National Science Foundation’s International Research Experiences for Students (IRES) initiative, the 10-week program expands WSU’s partnership with Germany’s CEPLAS—Cluster of Excellence on Plant Sciences—which integrates resources at the Universities of Cologne and Düsseldorf, the Max Planck Institute for Plant Breeding Research, and the Forschungszentrum Jülich research institute.

“Bridging the U.S. with Germany, this new program offers students an unmatched opportunity to learn how crop research advances happen through international cooperation,” added Mechthild Tegeder, co-lead and professor in WSU’s School of Biological Sciences. “The new perspectives our students will gain from this program will be critical to their future success in the increasingly global world of plant science.”

Knowledge gained by this fundamental research could pave the way for new crop plants that are more productive and robust against environmental challenges, leading to sustainable, efficient cultivation of crops for food, fodder, and energy.

“Under the mentorship of CEPLAS, students will address plant science questions ranging from plant biochemistry and physiology to statistical and evolutionary genomics,” said Helmut Kirchhoff, professor in WSU’s Institute of Biological Chemistry and co-lead investigator for the program. “This broad set of technologies and methods, together with the expertise of researchers in this bi-national research consortium, can significantly contribute to an urgently needed second green revolution in agriculture.”

Stan Kopriva, a professor of plant biochemistry at the University of Cologne, will oversee students’ research projects in Germany. Projects will focus on a comprehensive understanding of complex biological plant processes and traits that affect crop yield and adaptation to limited environmental resources.

“Engaging WSU’s students, this is a great opportunity for scientific and cultural exchange,” Kopriva said. “This program will extend our research portfolio and contribute to the international reputation of CEPLAS.”

WSU and the University of Cologne have been developing their international partnership for several years, after Joseph Iannelli, previous associate dean for international programs in WSU’s Voiland College of Engineering and Architecture, reached out to that German university in 2017, connecting with Kopriva. The two colleagues then led a meeting between scientists in CEPLAS and WSU’s College of Agricultural, Human, and Natural Resources Sciences, at the German delegation to the United Nations in New York, which ushered in a collaborative agreement as well as organization of a joint Transatlantic PhD Summer School in Germany, two seminar series, and the student exchange proposal, authored by Kirchhoff, Tegeder, Iannelli, and Kopriva.

The three-year program will involve 24 diverse WSU students, each of whom will receive a $9,000 fellowship for study in Cologne and Düsseldorf. Participating students will collaborate with 16 WSU professors and an equal number of CEPLAS researchers; projects will be jointly supervised by WSU and CEPLAS scientists. Students will also take part in English-taught workshops and cultural events, gaining familiarity with the culture and language of that European Union country.

“The program will support our objective of graduating internationally-educated students for leadership in globalized multicultural societies,” Iannelli said.