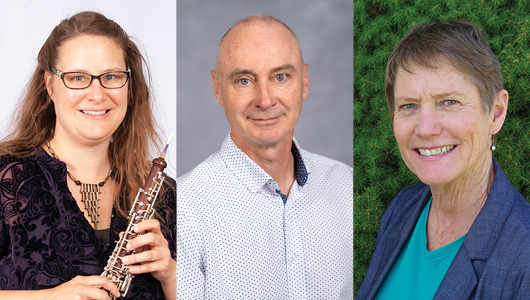 Three academic units in the College of Arts and Sciences are welcoming new leadership this fall.

In the School of Music, Professor Keri McCarthy succeeds Dean Luethi as director, and in the Department of Chemistry, Professor Cliff Berkman  succeeds Kirk Peterson as chair.

In the School of the Environment—which is part of both CAS and the College of Agricultural, Human, and Natural Resource Sciences—Allyson Beall King, associate professor, career track, succeeds Kent Keller as director.

Professor of oboe and music history at WSU since 2006, McCarthy has cultivated an international reputation as a chamber musician, soloist, teacher, and clinician. She has been active as a performer and researcher throughout Southeast Asia and as a co-founder of the Pan Pacific Ensemble, a chamber group committed to performing and commissioning music of contemporary composers from Asia and the United States and winner of the 2022 American Prize in Chamber Music.

In 2011, she was a Fulbright Scholar in Bangkok, where she researched connections between Thai traditional and contemporary musics, commissioning Thai and Malaysian composers, and performing new works with professional oboists in Thailand, Philippines, and Singapore. She earned her doctoral degree in music literature and performance at Indiana University and her master’s degree at Yale University School of Music.

“Dr. McCarthy brings a depth of creative, scholarly, and teaching experience that extends well beyond WSU,” Butler said. “Her work both within and outside the college has positioned her well to lead the School of Music forward,” he said.

As she begins her three-year term directing SoM, McCarthy is eager to increase opportunities for live music across WSU campuses, she said. “I’m excited about engaging with WSU students actively performing, listening, and creating new pieces and supporting my colleagues studying the ways in which music reflects cultures and identities, past and present.”

She also plans to magnify the roles of music across communities.

“The School of Music is a haven for creative artists, many of whom collaborate with colleagues in fine arts, creative writing, and the sciences to redefine music engagement locally, across Washington, and globally. I have great confidence in the transformative powers of our students and faculty, and I am honored to give voice to the outstanding artists in residence at WSU,” McCarthy said.

Berkman is a medicinal chemist whose major research emphasis is aimed at detecting and curing cancer. He investigates ways to selectively target tumor cells with diagnostic and therapeutic agents and his WSU laboratory is an international leader in prostate cancer research.

“Already a well-established researcher in biological chemistry, Dr. Berkman possesses the deep field knowledge and thoughtful approach to leadership that will help position our chemistry department to flourish in a time which demands an increasingly integrative approach to research and teaching in the sciences,” Butler said.

Berkman’s goals for his four-year term as chemistry chair center on supporting faculty and innovative research efforts “while offering top-notch educational experiences for our graduate and undergraduate students,” he said.

He earned his PhD in chemistry at Loyola University of Chicago and his bachelor’s degree in chemistry at Lake Forest (Illinois) College. He has published widely during his 15 years on the faculty at WSU and is the co-founder of Cancer Targeted Technologies with cancer drugs in clinical trials.

King has been a member of the School of the Environment faculty since 2008 and has taught courses in the discipline ranging from introductory to graduate levels while also advising or serving on committees for dozens of master’s and doctoral students.

She received the 2016 CAS Excellence in Teaching by a Clinical Faculty Member Award in 2016 and, in 2021, WSU’s Richard G. Law Excellence Award for Undergraduate Teaching with recognition of her work developing and refining an innovative student-centered pedagogy that is process-oriented, collaborative, experiential, and curiosity-driven and tending to issues of equity, inclusion, and retention. She completed the WSU Provost’s Leadership Academy in 2020 and has served the past several years as associate director of undergraduate programs in SoE.

“Jointly run by both CAS and CAHNRS, the School of the Environment is tackling some of our world’s most pressing challenges,” Butler said. “Dr. King’s long record of working within and across this unit and its multiple constituencies—including students and external stakeholders—has given her the right experience to lead this complexly integrated unit.”

Among her primary goals as SoE director is fortifying the school’s disciplinary strengths while promoting new collaborations across its various disciplines. Appointed to a four-year term, she aims to increase collaborations with agencies and industry that will support student career paths “and help our research be utilized in practical ways as we seek to find solutions to the ever-increasing aspects of global change,” she said.

“We are also working hard to increase diversity in our own ranks and within our pipeline of students, especially given that environmental problems disproportionately impact BIPOC and low-income communities,” King said.