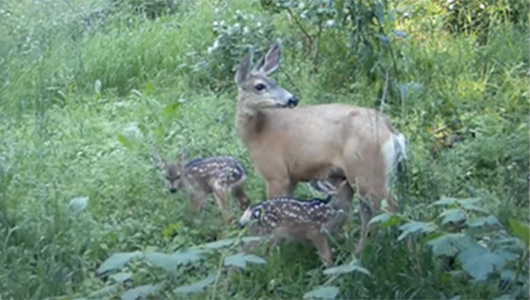 Prior to 2020, students enrolled in Washington State University’s natural resource ecology course (SOE 300) made field trips to Kamiak Butte County Park, 20 minutes north of Pullman, as part of a semester-long project. As lovely as spending class time off-campus in nature is, it’s also a challenge for students who don’t drive. During the pandemic, in-person field trips were not possible.

Enter the Virtual Ecology project, where School of the Environment instructor William Schlosser, affectionately known as “Dr. Bill,” worked with undergraduate and graduate students as well as the Whitman County Parks & Recreation Department to set up several camera traps throughout Kamiak Butte.

“Exploring the park online simplifies everything,” Schlosser said. “Students learn better now compared to when we did only live field trips. It’s impossible for a single teacher to be with all 100 students roaming the park.”

For the fall 2022 semester, the class field trip includes virtual data collection and analysis, followed by a one-day physical park visit for groups of 20 students. This hybrid approach lets students experience the best of both worlds.

“The field trip events are the most popular experience of this class,” Schlosser said. “It’s great to have them back in this hybrid model.”

Schlosser and his team post park videos and data on the class YouTube channel, which has dozens of clips anyone can watch. The page includes a variety of wildlife caught on camera traps, narrated 360-degree videos of the park, and drone videos.

“It’s not just a cool shot of a moose—students can look at the different species present in the biome of the butte and see how they’re linked with the land, climate, and time,” Schlosser said. “Students can go on their own and see field locations for themselves whenever they want.”

Over the course of each semester, the students create five report sections and combine them into one master document. One report section is based entirely on the hybrid field trip experience, and these field trips are no longer dependent on favorable weather, Schlosser said.

“There’s only maybe one month a year when flowers are blooming in great numbers,” he said. “Now students can see those flowers year-round. And they can measure various aspects of trees like height, diameter, number per acre, all from their computer or tablet, enabling calculation of data.”

Getting those videos isn’t always easy. Kate Thorne took the class and later became an undergraduate teaching assistant for the course. Being a TA meant trips to the butte to capture information.

“It was tough during the winter; the snow was so high I sank down on every step,” the junior wildlife ecology and conservation sciences major said. “It took us almost four hours to get to all the camera sites, but it was so much fun. I loved the hands-on activity, and the reward was seeing the videos we captured.”

The course it open to any WSU student regardless of major; Thorne took it her first year at WSU. As a TA, her responsibilities allowed her to work closely with students who wanted to go to Kamiak in person, the Los Angeles native said.

“Dr. Bill cares so much about what he teaches and the students who take his classes,” said Alex Kunz, another former SOE 300 student-turned-teaching-assistant. “He teaches skills that are applicable outside of the major, like how to effectively use Microsoft Office applications to make projects easier.”

Kunz, a Port Townsend, Wash. native, never visited the park as a student during the fall 2021 semester. After being a TA this past spring, he spent part of this summer adding to the course’s data collection. He’s working on a geocaching project and helping expand the website because there’s always more information to be found in nature.

“Ecology is a system of interconnected things,” said Kunz, a junior biology major. “It’s like a game of chess—there are no inconsequential pieces. You can’t have a successful ecosystem without all the parts working together.”

That outlook is just what Schlosser hopes his students take away from his classes.

“I want students to be inquisitive, to look at the geology of Kamiak and the plants and animals that live there and figure out how they got there and how they survive,” he said. “We’re using amazing technology that helps students, but it’s up to them to be curious. That’s what will help them years after they leave my class.”

Top photo: A mother and twin mule deer fawns walk through Kamiak Butte. The mother is feeding one of the twins while watching for predators.