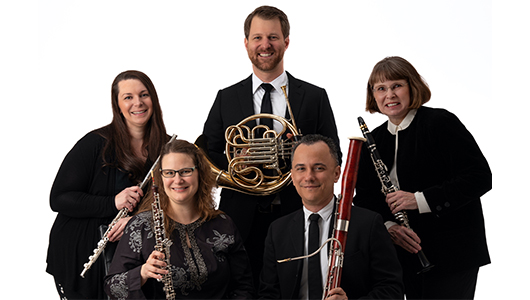 After a year-long process of adjudication, a quintet featuring WSU School of Music faculty has been named the winner of the 2022 American Prize in Chamber Music Performance.

The Pan Pacific Ensemble brings together talented soloists committed to performing music by composers from Asia and the Americas, and passionate about commissioning, promoting, and recording new music, and providing experiential opportunities for audiences across the globe.

The group has performed at the China-ASEAN Contemporary Music Festival, the International Composition Festival in Thailand, and across the United States. The Pan Pacific Ensemble has commissioned numerous works for wind quintet by composers P.Q. Phan, Narong Prangcharoen, Asha Srinivasan, Kenji Bunch, and Nick Omiccioli.

These new works have been received by audiences across the United States and express influences ranging from Thai traditional music to rock and roll.

The American Prize National Nonprofit Competitions in the Performing Arts is the nation’s most comprehensive series of non-profit competitions in the musical and theater arts, unique in scope and structure, designed to recognize and reward the best performing artists, ensembles and composers in the United States based on submitted recordings. The American Prize was founded in 2009 and is awarded annually in many areas of the performing arts.