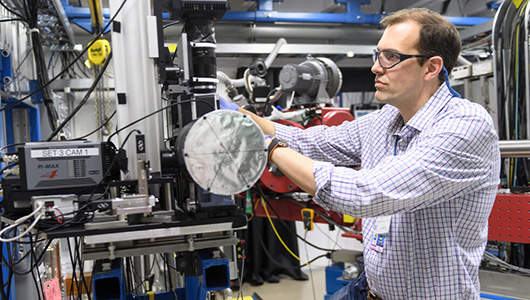 Scientists at WSU’s Institute for Shock Physics discovered something unexpected when they tested humankind’s most valuable metals to see how much pressure they could take.

It turns out platinum is the only precious metal that retains its atomic structure when subjected to the kind of pressure found at the center of planet Earth, holding up better than gold.

“No one really expected this. We thought that gold was stable forever, but it turns out it changes into a different related crystal structure under enough shock wave pressure,” said Yogendra Gupta, director of the institute. “So basically, if you want a material that will never change, no matter what, then store platinum.”

“Science is all about curiosity,” Gupta said. “Even though I had 48 years of experience in this field, and I was certain gold would behave as I suspected, I was just wrong. That is why we do experiments in science.”

It’s this kind of intellectual curiosity and commitment to scientific discovery that has helped bring international acclaim to the University’ shock physics research and demonstrates the unique capabilities of WSU’s Chicago-based Dynamic Compression Sector (DCS), a facility designed and built by WSU at Argonne National Lab that enabled the experiments to be conducted.

“Science is all about curiosity. Even though I had 48 years of experience in this field, and I was certain gold would behave as I suspected, I was just wrong. That is why we do experiments in science.”

Yogendra Gupta
Director of the Institute for Shock Physics at WSU

In a series of studies from July 2019–July 2020, Gupta and his colleagues subjected four precious metals to increasingly extreme dynamic pressures to determine which one was the most durable. Platinum was the only one tested that held its structure up to 3.5 million atmospheres, the pressure at the center of Earth. In fact, the metal held its structure up to almost 4 million atmospheres, the point when it reached 3,215 degrees Fahrenheit and began to melt.

The researchers were surprised to find that the gold they tested underwent a structural transformation at a relatively modest 1.5 million atmospheres.

In addition, the WSU team also experimented with silver and copper. Silver underwent a transformation at around the same pressure as gold, and copper lasted a little longer before transforming at 1.7 million atmospheres of pressure.

The research suggests platinum may make a better pressure and temperature standard than gold for shock physics experiments.

At the DCS where the research was conducted, scientists use a powerful laser to subject different materials to pressures up to 4 million atmospheres over short intervals of about 10–15 billionths of a second. They then use something called a synchrotron to send x‑ray pulses into the materials to study what happens to their physical structure under the immense pressures.

“Basically, we can look inside things and provide information about their atomic structure,” Gupta said. “This is the only synchrotron-based facility in the U.S. capable of doing these kinds of experiments, which have practical applications in a variety of fields such as defense and manufacturing among others.”

The synchrotron will undergo a major upgrade — lasting 12–14 months — starting April 2023. During this period, the DCS will also undertake equipment enhancements to improve its capabilities and will be available for use by scientists from around the world in the summer of 2024.

“One of the great things about this facility is that anyone can use it,” Gupta said. “Scientists from WSU work with researchers from the U.S. and other countries.”