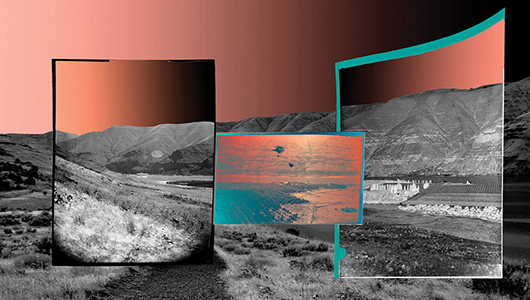 “Foremost, I hope viewers have an enjoyable art experience that includes many layers of multidisciplinary creative scholarship,” he said. “I also hope viewers leave with a better understanding of the Wawawai and how the area along with the Snake Rive has been changed and altered over time.”

The combinations, DeHart explained, can range from “casual snapshots to formal, researched images with exacting specificity.”

For his exhibit “Rambles through the Wawawai,” DeHart selected historical photographs from MASC’s William D. Barkhuff Image Collection and paired them with his own contemporary images. Barkhuff enrolled at Washington State College on opening day in 1892. In addition to his interest in photography, Barkhuff served as the first editor of the school newspaper, then called the “College Record.”

There are many ways to connect and engage with the exhibition, DeHart said, ranging from aesthetics to history, technology, environmental policy, archives, and more.

The Wawawai Landing is located along the rugged bottom of the Snake River Canyon, on the southwest edge of the Palouse. The name Wawawai (rhymes with Hawaii) originates from the term Wawawa, which means “council grounds” for the Nez Perce and Palouse Tribes. White settlers colonized the lands in the 1870s, planting orchards and grazing cattle on the grasslands in the proceeding decades.

A small community existed throughout the first half of the 20th century and included a post office, school, and boat landing. In the 1960s, work began on vacating the lands for Lower Granite Dam, which was completed on Feb. 15, 1975. The dam consequently created Lower Granite Lake, flooding the original Wawawai area lands under more than 80 feet of water.

‘A meditation on place’

Fond memories include scrambling over a field for a fallen drone with his son, and watching the variety and beauty of wildlife on his excursions. “Each walk is a kind of journey, in which I intuitively trace the landscape with my camera,” DeHart said. “The camera invites a meditation on place, encouraging me to contemplate the contours of the land while moving through the changing environs. Each visit reveals a different reading of the landscape, informed in part by the reviewing and editing of images made during previous visits.”

Aided by historical photographs and the Wawawai’s known history, DeHart said he likes to visualize what the landscape looked like before the flooding of the river plain. “I also imagine what the environs will look like in the future when the dams are gone and the river is free flowing and wild again. It gives me hope.

“I have developed complicated emotions for the Wawawai, simultaneously celebrating the beauty of place while lamenting loss,” he said.

Titled “Rambles through the Wawawai: A Re-Photography, Photographic Project,” the exhibit will be on display at WSU’s Manuscripts, Archives, and Special Collections public space in the Terrell Library on the WSU Pullman campus through May 2023.