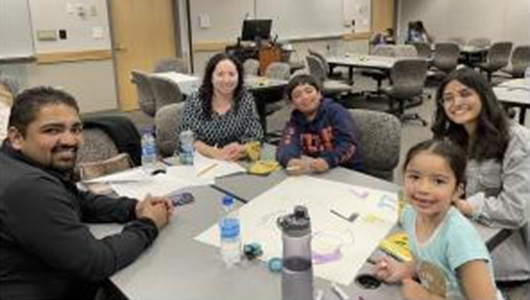 Sharing data concepts with young children and engaging them in fun, data-related activities can have a lasting impact that can opens them to a future in data science.

“Without knowing it, they’re working with and engaging in data analysis, and this opens the door for new experiences which could possibly change the trajectory of their future learning,” says Boeing Distinguished Professor and Professor of Statistics Nairanjana (Jan) Dasgupta.

“As data culture becomes the norm, data needs to be part of basic literacy from an early age. Introducing concepts of data early, and often, enhances data literacy and a student’s ability to understand, question, build critical thinking skills, and use common sense. Unlike math or quantitative literacy that rely on arithmetic skills, data literacy is related to visualization, story telling, and number sense.”

To help spark interest in the discipline, Dasgupta initiated the Data Literacy Community Camp program in the spring of 2022 with a focus on introducing data science to young students and their families in underrepresented communities.

Each data camp focuses on story-telling, visualization, and using the word “data” frequently without emphasizing math skills. The objective is to engage students in age-appropriate data immersive activities to start conversations, create awareness, and pique interest before students might be affected by negative math bias.

“If students have a negative reaction to math in their early grades they frequently won’t consider data-related fields in the future. They expose students to data, and data concepts, in a happy, positive, and comfortable atmosphere with activities and discussions that include other family members.”

All about the camps

The camps were held in the evening on May 19, 2022, in Cashmere, Washington, and May 21, 2022, in Richland, Washington. Dinner was provided for families on both evenings so they could enjoy a time of fun and activities related to data. The atmosphere was happy and light-hearted. By having family members join in the activities they also could learn how data may be used, or misused.

Camp activities included an icebreaker exercise of guessing the number of M&Ms in a jar. Whoever guessed the closest number won the jar. Another activity was to complete a questionnaire that asked for birth date, a favorite color, animal, time of day, song, season, food number, candy, and ice cream. Participants then pre-filled posters with months and birthdays, and constructed a histogram. Students were asked into which month they thought most birthdays would fall. This was followed by a discussion on the most common birth date and a conjecture of why. Next, students designed a game of putting table tennis balls into jars and they came up with a point system.

There were also toy car races where each student picked a car, and parents, students, and facilitators predicted race outcomes. Students were encouraged to reason why one toy car would be faster than another.

UNO and dice games were played while facilitators asked strategy questions. Facilitators emphasized to the students that they were making “data-informed” decisions in each of their plays. The sum of two dice was plotted while using stickers, and a discussion followed on what would be a likely outcome and what would not.

During dinner each facilitator talked with parents and children about their future plans and why it is important to understand data in our current world of automation.

Afterward, each family used the information that had been collected during the camp to visualize answers in any way they wanted. Most chose to focus on their favorite animals and drew them using their favorite colors. Parents and students joined this activity with energy. One student from each family was then invited to talk about their family’s “data story.” Most of the time, all of the siblings went up to present, collectively holding their poster, and often parents joined, as well. The parents seemed to have as much fun as the students while also critiquing one another’s art work.

The last activity was a “web scraping” from Twitter that was used to create word clouds. Students and parents typed in their own search words. Students searched for words like “soccer,” “football,” and “Nemo,” while parents searched for words like “jobs,” “salary,” “Cashmere,” and “Tri-Cities.” It was eye-opening for families to see how much can be done with data, and how it can be used.

In the end, each family received a goody bag and left the camp happy and smiling. Many asked for another camp in the fall. One student, Alex, 10, said he would like to “come to WSU and study data analytics” and drew the university logo on his poster saying he would be in the class of 2032. Another student, Jaime, 14, said, “I want to go to college, but how do I go?”

Participants in both camps were asked if they would like to attend another data camp and 100 percent responded positively. Students also said they would like to bring more friends and family with them next time. With funding, Professor Dasgupta hopes to hold more data camps next year.

Originally posted by Department of Mathematics and Statistics