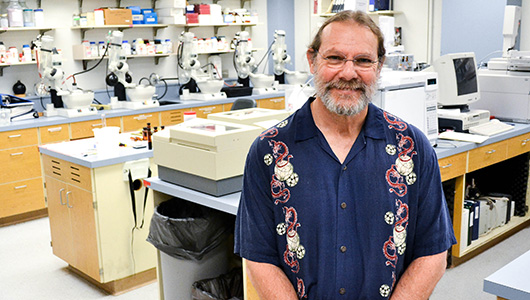 Allan Felsot, a professor and extension specialist associated with the School of the Environment at WSU Tri-Cities, is among 45 members of the American Chemical Society recently honored as new fellows of 2022.

“I’m very honored to be recognized for the work I’ve done,” Felsot said. “It does make me feel like I’ve impacted my field, not only with my research but by helping new generations continue to learn and develop.”

The ACS Fellows Program, begun in 2009, recognizes a limited number of its members each year for outstanding achievements in and contributions to science, the profession, and the organization itself.

Felsot is an entomologist and has been a member of WSU faculty since 1993 following a 14-year faculty appointment at the University of Illinois. His research and extension interests have included hazard assessments of transgenic crops; pesticide drift and buffer zone design; reduction of insecticide application rates using new sprayer technologies; enhanced biodegradation of pesticides; remediation of pesticide waste in soil; best management practices for controlling agrochemical movement to surface and ground water; analytical chemistry of pesticide residues in soil, water, and food; and pesticide toxicology, regulations, and risk communication.

At WSU, Felsot has mentored more than 50 master’s and doctoral students and served as academic director for the math and science sector of the College of Arts and Sciences at WSU Tri-Cities. He regularly teaches courses across CAS and in the College of Agricultural, Human, and Natural Resource Sciences, ranging from general entomology to integrated pest management, pesticide toxicology, and insect and plant physiology.

He was instrumental in developing new courses at WSU Tri-Cities and several more for the University’s Global campus. In 2019, the Entomological Society of America honored him with its Distinguished Achievement Award in Teaching.

In addition to teaching, Felsot presents dozens of lectures each year for WSU Extension workshops and programs. He has developed youth workshops in insect biology for middle school students through WSU’s GEAR UP program, which helps prepare students for college, and for WSU Tri-Cities’ STEM summer camps.

For the past decade, Felsot has focused primarily on teaching and less on conducting original research, but he stays abreast of the latest work in his field of pesticides and environmental toxicology.

“If you have a real interest and love for something, you keep doing it,” said Felsot, 72. “I’m driven by curiosity. If you’re curious, you can make real contributions, whether in new research or as a mentor to the next generation of scientists.”

He joined ACS in the late 1970s as a graduate student and served the organization in various leadership positions, including as program chair in his division and, for 14 years, as leader of an annual Young Scientist Symposium.

Founded in 1876 and chartered by the U.S. Congress, ACS has over 150,000 members in 140 countries. Its mission is to advance the chemistry field and its practitioners and to improve people’s lives.