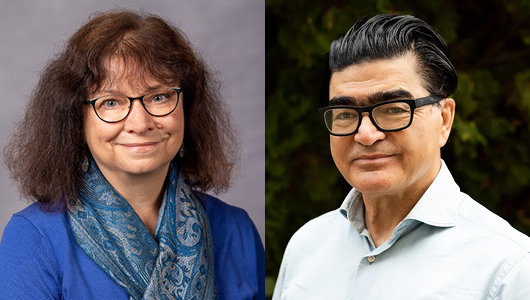 Exploring these stories to understand ways architectural elements can shape daily life and society is at the heart of a new certificate program being developed by an interdisciplinary team of WSU faculty in architecture, engineering, and the humanities. Creation of the five-course series is funded by a recent curriculum innovation grant from the National Endowment for the Humanities (NEH).

Dwelling in American Literature: An Experiential Program for Architects and Engineers “intends to bridge a significant disciplinary gap between engineering and the humanities for students and faculty at WSU and beyond,” said program co-developers Donna Campbell, professor of English, and Ayad Rahmani, professor of architecture in the School of Design and Construction.

Such transdisciplinary approaches to undergraduate education are vital to produce engineers and architects with a new level of innovation and social responsibility as well as humanists with a new appreciation for the tangible products of the world around them, the professors said.

Although designed for students in engineering and architecture, Dwelling in American Literature courses will serve majors from multiple colleges and disciplines and include several WSU UCORE courses to satisfy graduation requirements for all students.

“While mathematical and scientific skills are crucial to the success of an engineer, a humanistic education in general, and literature in particular, enhances the creativity and human insight necessary to create meaningful as well as functional built and non-built environments,” Rahmani said.

“The structures that architects and engineers design and build not only accommodate living, sleeping, working, playing, and cultural activities but are also integral to shaping the way humans find happiness and get ahead socially, financially, and more,” Campbell said.

“Students of architecture and engineering may understand much of this in the abstract but seldom evaluate it within context of the real stories that make their work necessary,” Rahmani said. “This is where literature can help by making available a variety of narratives—about difficult relations and power struggles as well as achievements and signs of human resiliency—whose essence is the daily fight for meaning and fulfilment, always played out in some kind of space, inside or outside of buildings, rooms, or offices.”

Through lectures, readings, student research, and cross-disciplinary writing, the new program will integrate humanistic methods and content with the specialized knowledge of engineering and architecture. Hands-on design projects taught in studio instead of the traditional classroom will provide further insights into the intersections of literature, culture, architecture, and engineering.

Students will examine the effects of cultural phenomena, such as the development of tall buildings through advances in construction techniques and technological achievements like elevators, along with the effects of rising numbers of parks, roads, trains, and suburbs.

They will gain additional experience through field studies at architectural locations in cities like Spokane, Phoenix, and Chicago, and through the complementary lenses of writers, such as Theodore Dreiser, Henry Blake Fuller, and Richard Wright, and musicians and artists of creative movements, such as the Chicago Black Renaissance.

“Edith Wharton, Jack London, Theodore Dreiser, Ann Petry, and Stephen Crane are among notable American authors whose work revealed that the city is not what it seems on its surface—a conglomeration of streets and sidewalks, buildings and bridges—but rather a cauldron of conflicting interests and contentious issues, with structures that emphasized class divisions and ethnic and racial inequality,” Campbell said.

“The stories make possible imaginary worlds, helping architects and engineers envision new connections that are different from and more constructive than the ones before,” she said.

“The humanities and literature give an otherwise inanimate and mechanical world a purpose and a vitality critical to assessing our behavior, shedding light on past mistakes, and informing decisions to advance society and cultures,” Rahmani said.

“In this program, students will learn that their professional mission next in life will only in part be about providing an excellent product. More so, it will be defined by the degree to which they know the repercussions of what they make on humans, the environment, and the future of the planet.”

The certificate program exemplifies the intent and purpose of WSU’s UCORE general education program aiming to broaden students’ knowledge outside of the major discipline while imparting complementary transferable skills.

Courses will involve collaboration with the WSU Manuscripts, Archives, and Special Collections department and individual research under supervision and mentorship of faculty in the College of Arts and Sciences and the Voiland College of Engineering and Architecture.

After its WSU launch in fall 2023, the certificate curriculum eventually will be distributed for use at universities and community colleges throughout the Pacific Northwest.

By J. Adrian Aumen, College of Arts and Sciences, for WSU News