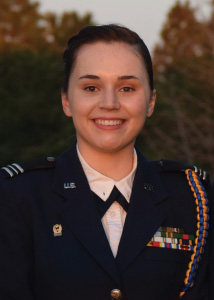 “I’ve had Tawny in a couple of classes over the years and she was an excellent student. She participated in class and it was clear that she critically comprehended complex and contradictory issues related to Ethnic Studies. She spoke up in class and was able to explain things to her classmates in tangible ways.” –Dr. Rory Ong

“One day last fall when Tawny had to wear her military uniform while she stood in front of class and spoke about militarization, I sensed that no one in the room was more conscious of the irony than she was. Her papers were great.” –Dr. John Streamas

“On May 07, I will be graduating with two undergraduate degrees, one in CES and the other in Social Sciences, as well as commissioning in the United States Air Force. I will be stationed in Luke AFB, and begin working as a Finance Officer. I look forward to applying all the things I have learned these last four years and continuing to grow as a person.”

Tawny will move to Luke AFB in Arizona June 1 as O1, Second Lt. She plans on a military career, and a master’s degree might also be in her future.