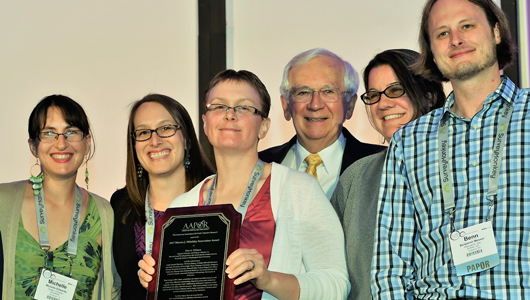 WSU researchers received a national award for designing a new survey method that is now used in censuses around the world.

WSU Regents Professor Don Dillman and a team of former graduate students were honored with the Warren J. Mitofsky Innovators Award from the American Association for Public Opinion Research. The last award was granted in 2015 to Nate Silver, creator of FiveThirtyEight , the statistics-based news site.

The WSU team’s innovation is overcoming the negative effects that modern communication trends have on public opinion survey results by turning to an old-school source: postal mail.

The advent of cell phones and caller ID in the 1990s led to a significant decline in telephone survey response rates – which had been the industry standard since the 1970s. While the internet introduced online surveys as a cost and time-saving option, email has not proven to be an effective way to drive a representative sample of the general public to take the surveys. Having that representative sample is critical when collecting information through a census or other large surveys that will be used to inform policy decisions and government spending.

The U.S. Postal Service, however, provides access to 98 percent of household addresses, a sizable population from which to draw a random sample. Dillman wanted to connect the usefulness of that sample frame with the cost and time saving benefits of online surveys. In 2007, he started working with graduate students in WSU’s  Social and Economic Sciences Research Center (SESRC) to develop a method that drove people to take an online survey through a postal mail request and small cash incentive. Over seven years they explored, refined and literally wrote the book on what is referred to as the web-push methodology.

The methodology surpasses the response rate of traditional telephone interview surveys nearly five times over. It has been tested and adopted for uses around the world, including censuses in Australia, Canada and Japan. The U.S. Census Bureau also will use the method for the Decennial Census in 2020.

“The reason this innovation happened is in part because of the research infrastructure available at the SESRC,” Dillman said. “If WSU wasn’t also educating Ph.D.’s in sociology, we wouldn’t have been able to do a lot of the technical work that was critical to this innovation.”

Pictured above: Don Dillman (third from the right) with collaborators (l-r) Michelle Edwards, Morgan Miller, Jolene Smyth, Leah Christian, and Benjamin Messer, all of whom received their WSU doctorates in sociology from 2007-2014.

The former students receiving the award have gone on to lead continued evolution of survey methods; Christian is the vice president of data science at Nielson, Messer works for Research-into-Action, and the other three work at universities across the country.

— By Alyssa Patrick, Office of Research, for WSU News, and Washington State Magazine