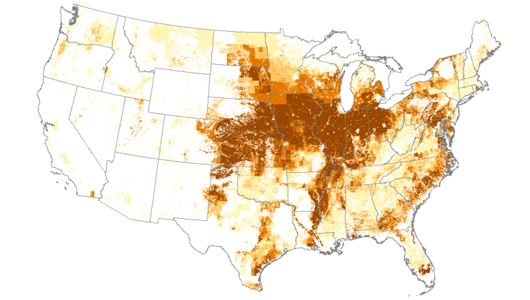 First, the good news. Washington State University researchers have found that a rat exposed to a popular herbicide while in the womb developed no diseases and showed no apparent health effects aside from lower weight.

Now, the weird news. The grand-offspring of that rat did have more disease, as did a great-grand offspring third generation.

“The third generation had multiple diseases and much more frequently than the third generation of unexposed rats,” said Michael Skinner, a Washington State University professor of biological sciences. At work, says Skinner, are epigenetic inheritance changes that turn genes on and off, often because of environmental influences.

Writing this week in the journal PLOS ONE, Skinner reports exposing pregnant rats to atrazine, a commonly used herbicide on corn crops across the Midwest. Manufactured by Syngenta, the hormone-disrupting compound has been banned in Europe, where it was found contaminating water, while the Environmental Protection Agency permits its use in the United States. It has been found in water systems serving 30 million Americans in 28 states, according to an Environmental Working Group survey of municipal water records.

After Skinner and his colleagues exposed pregnant female rats to the herbicide, their first generation of offspring showed no ill effects but weighed less than rats in a control group. Rats bred from them had increased testis disease and altered sperm production, mammary tumors in both males and females, early-onset puberty in the males and lower-weight females. Their offspring — the great-grand offspring of the exposed rats — also had more testis disease, plus early onset puberty in females, hyperactivity and leaner male and female physiques.

When Skinner and his colleagues looked at sperm of the offspring, they found epimutations, or alterations in the methyl groups that stick to DNA and affect its activation.

“Observations indicate that although atrazine does not promote disease in the directly exposed F1 [first] generation, it does have the capacity to promote the epigenetic transgenerational inheritance of disease in subsequent generations,” the researchers write.

The investigators also identified specific sets of epimutations that could lead to improved diagnosis of ancestral exposures and one’s susceptibility to disease.

Earlier work by Skinner has found epigenetic effects from a host of environmental toxicants, connecting plastics, pesticides, fungicide, dioxin, hydrocarbons, the fungicide vinclozolin and the popular insect repellant DEET to diseases and abnormalities as many as three generations later.

The study was funded by the Gerber Foundation, the John Templeton Foundation and the National Institutes of Health.

Top image: Geographical use of atrazine in the USA (2014), from supplemental figure 1.