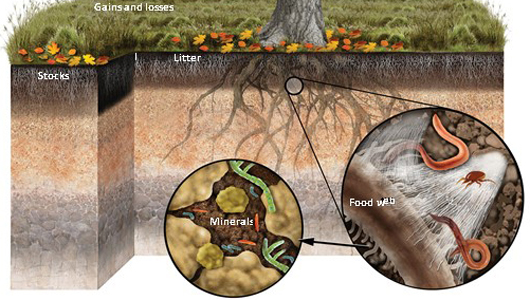 A Washington State University researcher has discovered that vast amounts of carbon can be stored by soil minerals more than a foot below the surface. The finding could help offset the rising greenhouse-gas emissions helping warm the Earth’s climate.

Marc Kramer, an assistant professor of environmental chemistry at WSU Vancouver, reports his finding in one of two related papers demonstrating how the right management practices can help trap much of the carbon dioxide that is rapidly warming the planet.

Soil holds more than three times the carbon found in the atmosphere, yet its potential in reducing atmospheric carbon-dioxide levels and mitigating global warming is barely understood.

Kramer, who is a reviewer for one of three reports issued with the federal National Climate Assessment released last week, compared what we know about soil to how little we know about the deep ocean.

“Hardly anyone has been down there, and they just found a new species of octopus” he said.  “We know more about the surface of Mars than we do about either the oceans or soils on Earth”

Half of global soil carbon

Writing with colleagues from Stanford, Oregon State University and elsewhere in Annual Review of Ecology, Evolution and Systematics, Kramer said more than half of the global soil carbon pool is more than a foot beneath the surface. He also found that soil organic matter at that depth is almost entirely associated with minerals.

Kramer elaborates on the connection this week in the journal Biogeochemistry Letters. His study, which he led with colleagues from Oregon State University and the Stroud Water Research Center in Pennsylvania, is the first to explicitly examine the extent minerals control nitrogen and carbon deep in the soil.

Keeping carbon in the ground

The more we understand these processes, the more we can tailor farming and other practices to keep carbon in the ground and out of the atmosphere, Kramer said. Almost three-fourths of all carbon sequestered in the top three feet of the soil is affected by agriculture, grazing or forest management, Kramer and his colleagues report in the Annual Review paper.

Earlier research by Kramer found that certain farming practices can dramatically increase carbon in the soil. Writing in Nature Communications in 2015, Kramer documented how three farms converted to management-intensive grazing practices raised their carbon levels to those of native forest soils in just six years. While cultivation has decreased soil carbon levels by one-half to two-thirds, the soils he examined had a 75 percent increase in carbon.

“I would call it radical, anytime you can get that much carbon in the system that quickly,” Kramer said.

Knowing more about how soil stores carbon can open the door to new techniques that will entrain carbon deep into the soil while continuing to produce food and fiber.

“Don’t forget, we need to double food production in the next 40 years,” Kramer said.

By Eric Sorensen for WSU News