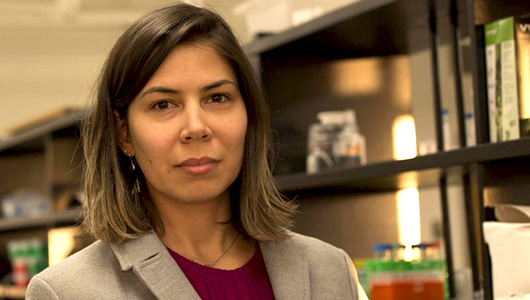 As weird animals go, the mangrove killifish is in a class of its own.

It flourishes in both freshwater and water with twice as much salt as the ocean. It can live up to two months on land, breathing through its skin, before returning to the water with a series of spectacular 180-degree flips.

And it is one of only two vertebrates — the other is a close relative — that fertilizes itself.

This last part intrigues scientists like Luana Lins, above, a postdoctoral researcher in the Washington State University School of Biological Sciences.

Intimately befriending oneself — called “selfing” — has benefits. If you find yourself in a good situation, with plentiful food or a nice climate, you can start a family on the spot. But because a self-fertilizing animal replicates only its own DNA, it is deprived of a diverse genetic toolkit that can be handy if the environment suddenly changes. Self-fertilization also can increase the odds of a dangerous mutation becoming common in a population.

Yet the killifish is unfazed by a wide variety of nasty situations, as if begging the world to hit it with its best shot.

It turns out that when Lins and colleagues in the lab of genome scientist Joanna Kelley sequenced the genome of the killifish, also known as the mangrove rivulus, Kryptolebias marmoratus, or just plain “Kmar,” it had a lot going on. Writing in the journal Genome, they describe how they compared 15 different lineages of the creature and found a remarkable amount of genetic diversity across the species.

But when a creature fertilizes its own egg with its own sperm, its nucleotides are more likely to match up with a uniformity that is broken only by the occasional mutation or recombination. Their paired nucleotides are called homozygous and, like clones, one generation is pretty much the same as the next.

In looking at killifish DNA from various lineages, one might expect to see a certain uniformity among them. Yet Lins and colleagues at WSU, Stanford University and the University of Alabama didn’t.

“We found way more areas that were heterogeneous, heterozygous, than we expected if you just followed the logic of something that has been mating with itself for a long time,” said Lins. “That opens up a can of worms. How is that happening?”

One explanation is that the creatures have a lot more mutations than previously thought. But mutations have a certain regularity or odds, making this much diversity unlikely.

Separate studies have found that when hermaphrodites are exposed to fish from different lineages — male fish or other unrelated hermaphrodites — they are more likely to lay more eggs than with fish from the same lineage. It could be that the Kmar are occasionally living through one of the archetypal narratives — stranger comes to town — and when they see the stranger, they capitalize on this new pool of exotic DNA. They are drawn to the stranger, or they respond to the stranger by producing extra eggs.

For all their limited brain capacity, the fish aren’t exactly dumb. Lins has noticed that they learn when it is time to eat, rising to be fed. Still, spotting a new pool of DNA would be a remarkable sort of perception, for a fish or really any other creature.

“How they know how different the other individual is, we don’t know,” said Lins. “There are a lot of unknowns, and I think that’s the fun of science. We’re all trying to figure out what is going on with these fishes.”