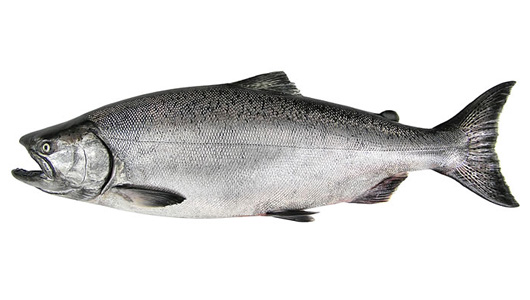 Columbia River Chinook salmon have lost as much as two-thirds of their genetic diversity, Washington State University researchers have found.

The researchers reached this conclusion after extracting DNA from scores of bone samples — some harvested as many as 7,000 years ago — and comparing them to the DNA of Chinook currently swimming in the Snake and Columbia rivers.

Preserving genetic diversity is a central goal of the Endangered Species Act, in part because it helps a species adapt to changing environments. Yet it is rarely measured to this degree. Writing in the journal PLOS One, the researchers say their analysis “provides the first direct measure of reduced genetic diversity for Chinook salmon from the ancient to the contemporary period.” In effect, they look beyond the four H’s of fisheries management — habitat, harvest, hatcheries and hydropower — to consider a fifth H, history.

The researchers found no specific cause for the decline. Possible impacts include heavy native fishing pressures at falls along the Columbia, intensive fishing in the wake of European settlement and the arrival of dams.

“The big question is: Is it the dams or was it this huge fishing pressure when Europeans arrived?” said Bobbi Johnson, who did the study as part of her WSU doctorate in biological sciences. “That diversity could have been gone before they put the dams in.”

Johnson’s co-authors are Gary Thorgaard, a WSU emeritus professor of biological sciences, and Brian Kemp, a former WSU molecular anthropologist and ancient DNA expert now at the University of Oklahoma. The researchers also worked closely with the Spokane and Colville tribes, associated agencies and Stan Gough, director of Archaeological and Historical Services at Eastern Washington University.

The researchers started with a trove of 346 vertebrae drawn largely from ancient garbage piles, or middens. Wearing not one but two layers of medical gloves to avoid contaminating samples with their own DNA, the researchers gleaned sequences of mitochondrial DNA from a region shared by 84 of the ancient fish.

“It’s like a little snapshot that tells you who’s who, who’s in what family or what lineage,” said Johnson.

She then compared these with the same identifying regions on 379 contemporary samples.

“We found what was long suspected, that there was a lot of genetic diversity present, at least prior to when Europeans arrived,” Johnson said.

The researchers were surprised to see a big difference between the diversity of contemporary Columbia and Snake River Chinook. On the upper Columbia, two-thirds of the Chinook genetic diversity has been lost. On the Snake, one-third has been lost

While the researchers looked at ancient Chinook DNA from the Spokane River, there are no contemporary Chinook for comparison as construction of the Little Falls Dam in 1911 blocked their migration, Johnson said.

However, she said, the researchers found the ancient group had a large number of lineages, six, “and a diversity higher than any single-stock fishery in the contemporary Columbia sample.”

Northwest Native Americans have caught Chinook for more than 9,000 years, often around natural barriers like waterfalls that served as bottlenecks for the salmon’s prodigious runs. Europeans were quick to exploit the fishery after arriving in the 1860s, and between 1889 and 1922 they harvested as many as 25 million pounds a year.

That declined to 15 million a year over the middle of the 20th Century and now stands at less than 5 million, the researchers report.

The Rock Island Dam, the first on the main stem of the Columbia, was built in 1933, followed by the Bonneville Dam and the Grand Coulee Dam, in 1941, blocking ocean-going salmon from more than 1,000 miles of the upper Columbia. Dams on the Snake came more than a decade later.

The Columbia River Basin now has more than 400 dams, the researchers write, blocking more than half the river system’s spawning habitat.

If the researchers were to tie a loss of diversity to market fishing or dam construction, they would need the DNA of fish from those periods. However, they were unable to draw workable DNA from salmon tissues preserved during the commercial fishing or dam-building eras. Their youngest ancient DNA sample was from a 150-year-old sample caught near Fort Colvile.

Kemp, Johnson’s co-advisor with Thorgaard, said the study’s findings provide a baseline for what existed in the past and can inform discussions on the difficult task of bringing stocks back.

“This study serves as a tool for conservation genetics,” he said.