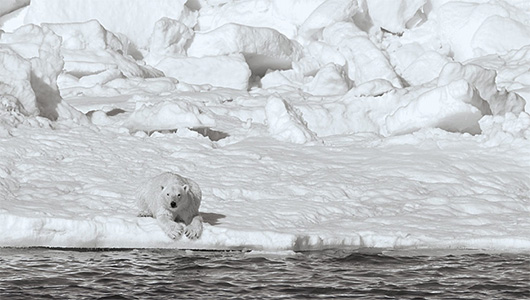 Could, as some fear, the trend spell extinction for Ursus martimus?

For two of the country’s premiere polar bear researchers—wildlife biologists Karyn Rode (’99 MS, ’05 PhD) and David Douglas (’86 MS), both of whom work for the U.S. Geological Survey’s Alaska Science Center—the answer is a decided “No.”

But neither is the future rosy for the animals, according to Douglas, who uses satellite tracking to monitor their movement and fill in “key information gaps” on how the bears use both the sea ice and land.

“If we let global warming get so bad that no polar bears in the Arctic can survive, then our planet has got a world of problems,” he says. “Nobody will care about polar bears at that point.”

Some studies suggest that there are 20,000–25,000 polar bears living in the wild, but exact totals aren’t known. What is known is that their icy seal hunting habitat is under siege by rising temperatures. In March, sea ice measured 5.4 million square miles—larger than the United States by 1.6 million square miles; that compares with a historical average of 5.9 million square miles.

While the USGS has no say in discussions about limiting greenhouse gas emissions —the prime reason for the Arctic thaw, according to most scientists—the work of Douglas and Rode attempts to influence dialogue.

“We can’t intervene, but we can communicate and try to make the message known as to what we see as the ramifications for polar bear habitats,” Douglas says. “We do our best to objectively inform decisions. That’s the mission.”

For her part, Rode spends up to six weeks annually in the Arctic hinterlands, namely the Chukchi Sea, where she measures and takes blood work from sedated bears. She also observes behavioral patterns.

Sea ice losses have forced the bears to spend, on average, 30 more days on land while waiting for winter ice to form, at which point they can return to their hunting grounds.

“There’s some food resources available on land, but for the most part they’re resting through that time period,” Rode says. “Since 2011, we haven’t seen it affect the condition of the population. We’re continuing to closely monitor how some of these changes may or may not affect population dynamics.”

Mathematical models suggest that entire populations of polar bears could go extinct by the end of the century, “but it’s important to keep in mind that polar bears have a large range, and across the circumpolar Arctic, the rates of sea ice loss vary,” Rode says. “In some areas, the projections for sea ice are not as dire.”

When they’re on land, the bears are known to eat berries or bird eggs. Douglas says the animals are “kind of fasty,” meaning they’ve adapted to go for three or four months without eating seals. “All bears are sort of intrinsically adapted to a feast-and-famine lifestyle,” he notes.