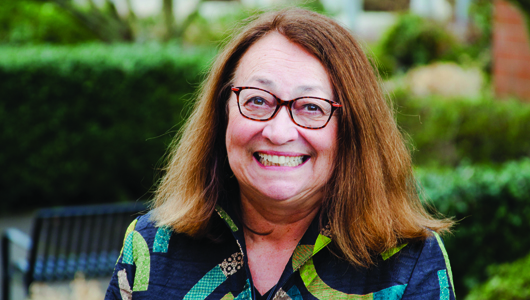 Although she spent much of her career in administrative positions, history professor Candice Goucher has always thought of herself as a scholar first and foremost.

Her research combines the theories and methods of history, archaeology, ethnography, art history, ecology and chemistry. She is well known for her books and articles on African foodways, metallurgy, and popular and political culture, as well as global themes in world history. Candace is currently collaborating on “Striking Iron: The Arts of the African Blacksmith,” an exhibition set to open in June 2018 at the Fowler Museum in Los Angeles, and working on a related book and yet another volume about African ironworking. She’s also an award-winning food history author: her book on how European, African and Asian foods, and culinary traditions came together in the islands of the Caribbean and then dispersed throughout the world as part of globalization earned international accolades.

She came to WSU Vancouver in 2000 as director of the College of Liberal Arts (now part of the College of Arts and Sciences) and later was director of undergraduate studies. Before that, Goucher chaired the Black Studies Department at Portland State University. She joined the PSU faculty after earning her doctorate in African history from the University of California Los Angeles.

Even before returning to full-time teaching at WSU Vancouver in 2008, Goucher remained enormously productive as a research historian. Her work combines the theories and methods of history, archaeology, ethnography, art history, ecology and chemistry. She is well known for her books and articles on African foodways, metallurgy, and popular and political culture, as well as global themes in world history. For example, she studies how European, African and Asian foods, and culinary traditions came together in the islands of the Caribbean and then dispersed throughout the world as part of globalization.

In just the last five years, Goucher has published four books (in five volumes), four journal articles, six invited chapters in books, edited a special issue of a scholarly journal, created a blogsite, contributed 31 short essays and/or encyclopedia articles to various publications, and curated two exhibitions. She received WSU Vancouver’s Chancellor’s Award for Research Excellence in 2017, the latest in an impressive list of honors and awards from such organizations as the World History Association, the Society for Visual Anthropology, the National Endowment for the Humanities and the Huntington Library.

She embarked upon one of her signature achievements shortly after she arrived at WSU Vancouver, when she was part of a $2.8 million grant from the Corporation for Public Broadcasting and the Annenberg Foundation to create a huge project called Bridging World History. She and Linda Walton of PSU, who had published history texts together, were the co-lead scholars. They brought together “dozens and dozens of scholars” to film 26 videos and a website that have been used on public television and in world history classes all over the globe. Even today, after nearly 10 years, the website receives 190,000 discrete hits per year.

Goucher is currently relishing the fruits of her disciplined career.

In the late 1970s, when she began researching African metalwork for her graduate studies, she had the field practically to herself. “I’m recognized as being kind of an old timer in terms of research on African ironworking,” she said. Initially she worked with a blacksmith in 1979 in a small village in Ghana. Around the same time, she was involved in an archeological excavation of a medieval town. There, she discovered the extraordinary technology involved in the production of iron objects, implements and weapons that supported everyday life.

Now she is collaborating on a monumental exhibition, “Striking Iron: The Arts of the African Blacksmith,” which opens in spring 2018 at the Fowler Museum in Los Angeles and will later travel to Paris and other cities. Goucher is also co-editor of a book to be published by the University of California Press in conjunction with the exhibition.

In addition, she is working on another volume about African ironworking as it has spread throughout the African diaspora via immigration. “I am looking at the global impact of African technology, which has been very understudied and underappreciated,” Goucher said. Tentatively titled “The Memory of Iron,” this book will seek to restore the role of African ironworkers to the history of technology, which for centuries has ignored Africa.

Skills with iron were valued in the New World, and the knowledge of African craftsmen helped forge a new understanding of working with metal. “We now know Africans contributed essential knowledge and skills, especially to the Americas but also to the whole Atlantic world,” Goucher said. She sees “The Memory of Iron” as the culmination of decades of scholarship around African metallurgy.

Goucher has studied Caribbean food almost as long as she has studied African ironworking. “I had these two parallel interests that have been percolating for a long time,” she said. Among her many honors, her 2014 book “Congotay! Congotay!” won both the National and the World Gourmand Awards for Best Book on Caribbean Food.

“My interest in food really came from having eaten on both sides of the Atlantic,” Goucher said. At home, she and her husband, Joseph Lambert, eat a lot of African, Caribbean and South Asian foods.

“You get accustomed to the spices,” she said. “For me to have a meal without a  little bit of curry or a little bit of pepper  is unusual.”

This past summer, she spent a few days in Boston at the World History Association conference with the theme of food in world history. Goucher was one of five professors demonstrating different Atlantic World cuisines. She made crab callaloo, a Caribbean dish popular from the 18th century with African origins, featuring coconut milk, crab and greens. She opened her presentation with a Trinidadian calypso song, “Gimme Crab and Callaloo.”

“We don’t tend to acknowledge how historical the food is that we eat,” she said. “All foods are amalgams of cultural history.”

Goucher is as committed to teaching as to research, and says that “when teaching goes well, you learn so much from your students.”

What makes a good teacher? “It’s hard to know where your inspiration comes from, but history is part storytelling,” she said, “and when you travel as I have had the good fortune to do, you have a stable of stories to tell about the past. It’s a nice way to tell students how history is constructed—that it’s a process of reconstructing lives from  the past.”

She has been instrumental in shifting the teaching of world history from an outdated rise-and-fall-of-civilizations approach to a more engaged thematic approach to the past, which makes it possible to see contemporary global and environmental issues borne of history. “It’s a way to make history more relevant to our lives,” Goucher said.

Goucher encourages students to pursue a multicultural education. “The availability of study abroad is so important for our students,” she said. “It is often the key defining experience of their education.” She should know. Her own career has its roots in her experiences as a high school exchange student in South Africa, and as an undergraduate she spent time in Nigeria. Goucher’s next project, after the ironworking exhibition, is to write a book about food and culture on Michigan’s Upper Peninsula, her home territory.

Meanwhile, the exhibition in Los Angeles promises a different kind of thrill than solitary scholars usually get to experience—as well as the possibility that a missing link in the worldwide history of technology will receive its rightful recognition. “It is so much fun  to be around other people who are so excited about these works of art that  African blacksmiths created over centuries,” Goucher said.