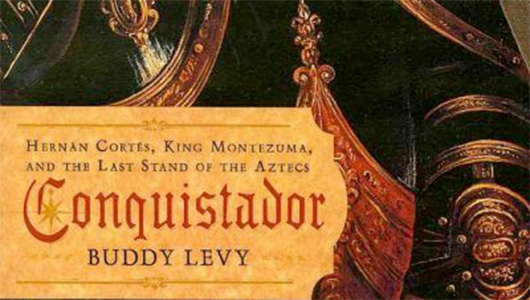 Two Hollywood production companies have optioned English instructor Buddy Levy’s Conquistador: Hernan Cortes, King Montezuma, and the Last Stand of the Aztecs, with plans to turn the epic tale into a TV series.

“I knew from the beginning when I wrote it that it had cinematic value,” said Levy. “Not necessarily from my writing, though I hope that’s part of it. It’s just a whopper of a tale.”

Published by Bantam Books in 2008, Conquistador chronicles the demise of the Aztec Empire as Hernán Cortés imprisons its leader, Montezuma, and captures what was then the most populous city in the world in what Levy called “the costliest single battle in history.” Some 200,000 Aztecs died.

Overbrook Entertainment, a company whose partners include actor Will Smith, and MOTOR optioned the book after discussions started last fall. MOTOR has produced the History Channel series “Knightfall” and “The Founder,” the feature film about McDonald’s founder Ray Kroc.

The project now faces the usual challenges: financing scripts for a pilot and other episodes, getting the interest of A-list talent for premier roles like Cortés, Montezuma and their interpreter, La Malinche, and finding a time when the principals are free. Levy himself is rushing to finish Labyrinth of Ice, a book about the Lady Franklin Bay Expedition that saw 18 or its original 25-man crew perish in the Canadian Arctic.

“I’ve learned to be kind of patient, even though it’s frustrating because you think, ‘Oh, this is such an obvious story to make’ and there are projects being made all the time that aren’t so great,” said Levy. “Here’s one of the most fantastic stories ever recorded in human history with all of the elements. It still is a struggle. I guess that’s what makes these things really fulfilling when they happen.”

The rising demand for content from streaming services like Amazon Prime, Netflix, Hulu and Apple appear to be working in Levy’s favor.

“The landscape is pretty positive for content creators and also history it seems because there’s an appetite for history at the moment,” he said. “I never know exactly what drives the market. I just keep writing history because I like it.”