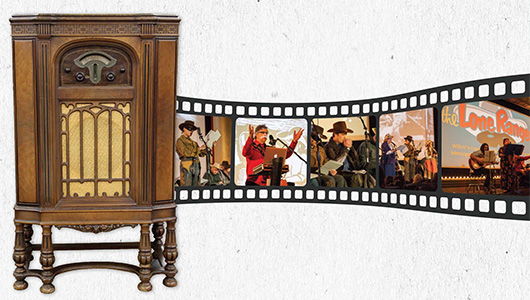 Before riding off in search of the Oregon Territory, the rangers stood and joined the audience in one final chorus of the famous words from the mysterious masked man known as The Lone Ranger: “Hi-yo, Silver! Away!”

Applause erupted for the 11 voice actors and Foley artists dressed for the Old West. The lights of Vancouver’s timeless Kiggins Theatre slowly brightened, and the live radio broadcast of “The Lone Ranger Re-Imagined,” which had been streaming online in 32 countries across the globe, concluded.

This live performance of “The Lone Ranger” held last April was the first of five shows in the sixth season of the Re-Imagined Radio project, an annual series produced by John Barber, faculty member in WSU Vancouver’s Creative Media and Digital Culture program.

An exploratory pairing of old media and new creative technology, Re-Imagined Radio sends audiences back in time with sound-based storytelling, immersing them in an experience mimicking original radio drama productions. It seeks not only to entertain, but also to educate and engage the community with quality arts.

From the classroom to the community

Born in a digital storytelling class Barber taught in 2013, Re-Imagined Radio was the answer to a student’s question about his upcoming project. Barber was using the 1938 radio drama “The War of the Worlds” to teach sound editing, and he encouraged students “to imagine either an alternative story, a back story or a continual story.”

One student asked: If a person wasn’t familiar with the original broadcast of “The War of the Worlds,” how could anyone follow and appreciate an alternative or continuing rendition of it?

“I thought that was a really good question,” Barber said. “And the solution really just came almost immediately.”

Barber had worked with the Willamette Radio Workshop out of Portland, a group of volunteers passionate about old-time radio and re-creating dramas from the Golden Age of Radio, the 1930s to the 1940s. He asked Willamette if they’d be interested in partnering to produce a live performance of “The War of the Worlds” broadcast. Because it was a radio drama they had performed before, it was an easy yes.

“The pieces just kind of came together,” Barber said. “I guess I really must have been thinking about all this subconsciously; just the right question, just the right lineup of the planets—the pieces were all there, and I decided to give it a try.”

The next step was to find a venue. Dan Wyatt, WSU alumnus and owner of Vancouver’s historic Kiggins Theatre, gave Barber permission to use the theater if Barber took charge of promoting the event.

Serendipitously, Barber said, “The night we had chosen [for the performance]—with no consultation on this at all, it just happened—was the 75th anniversary of the original broadcast of ‘The War of the Worlds.’ The same night, the same time, 75 years later.”

Two members of the audience even remembered hearing the original broadcast on Oct. 30, 1938.

After the show, people were invited to walk next door to a gallery space to view student projects from the digital storytelling class. “You could go hear these other takes on ‘The War of the Worlds,’ having just heard a re-creation of the performance using the original script,” Barber said. “So there was no question about [people] being aware of it.”

Falling in love with sound as an art

Barber’s interest in radio dates back to his childhood, when he would hide under his blankets in bed, secretly listening to the radio when he should have been sleeping. He would eagerly listen for a favorite song or try to tune in a far-away station.

“I think it’s interesting in that [radio’s] death has been predicted for decades, but it’s still here, it’s still strong, it’s still going, despite the fact of being digitized,” Barber said. “That notion of the radio as a medium to turn to for a connection to information, entertainment, persuasion, whatever rhetorical form you want to put there—that’s very real to me and my life.”

In an age of media saturation, modern entertainment relies on bold visuals to capture the attention of audiences; creators use the highest definitions and advanced digital effects to build interactive experiences. In a movie theater, the viewer simply absorbs the content, but with radio, Barber said, listening is active, pushing people to question and analyze what they’re hearing.

“[Radio] has a real connection with human imaginations, human sensory input,” Barber said. “When we’re listening, we’re actually creating a sense of reality; so I think that strength of early radio—especially the so-called ‘Golden Age’ of radio and radio drama—is still very much a viable thing.”

After a successful first show with a sold-out crowd in which some people stood and some had to be turned away, Barber went on to produce another 15 shows over five years. At that point, Willamette Radio Workshop decided to move in a different direction and is not involved in this season’s Re-Imagined Radio episodes.

In his search for talent, Barber connected with Metropolitan Performing Arts, a local acting group in Vancouver. “We’ve now done two performances and this fall we’ll have four more, so we’ll have a really good lineup of experience working as new partners,” Barber said.

However, with the departure of Willamette, Re-Imagined Radio also lost some Foley artists and sound designers. “In many ways, they provided a level of performance that the current iteration of Re-Imagined Radio cannot yet match,” Barber said. “But there’s no reason that we can’t in the future.”

Barber wants to keep the productions completely local. “[Now] that we’ve got local people actually doing the production, I’m trying to build that up,” Barber said. “The ‘A D.B. Cooper Tale’ script is going to be written by someone in the community.”

“A D.B. Cooper Tale” will be the fourth episode in this sixth season of Re-Imagined Radio, playing at Kiggins Theatre on Nov. 21. While this story is a bit of a legend, Barber said this episode will test how well the community interacts with a local story.

“I strive to go for radio dramas that are family friendly, that people will have some awareness of, that might interest people in seeing a performance of that work,” Barber said. “Then I try really hard to make each performance as interesting as possible, and hopefully that will cause people to talk.

The big challenge is getting people to come see the show and pay the admissions so we can raise money to pay the bills,” Barber said. The performers’ time is the only donation the project gets. Barber said he pays for use of the Kiggins Theatre, a sound technician and promotion materials.

Each live performance of Re-Imagined Radio is recorded and streamed live on the internet through the American Senior Radio Network. That enables people all over the world to tune in and listen. About 500 listeners in 34 countries tuned in to hear the last two performances.

He said he’d love to see Vancouver become a hub for radio and audio drama. Barber imagines a radio drama festival in Vancouver that attracts participants from around the world.