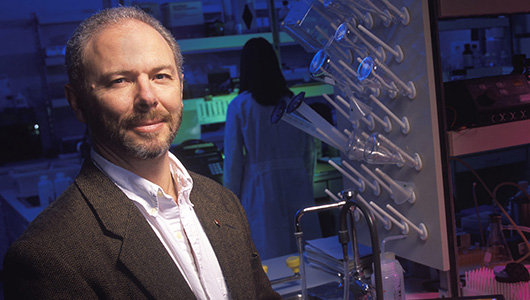 Washington State University researchers have received nearly $3 million from the John Templeton Foundation, the second such grant in four years, to see if they can anticipate and prevent diseases by developing epigenetic biomarkers that could provide early stage diagnostics for disease susceptibility. Their approach would be a departure from traditional “reactionary medicine,” which treats diseases after they develop, as well as from diagnoses based on an individual’s genetic profile.

WSU biologist and professor Michael Skinner is the principal investigator on the grant and a leader in the field of epigenetics, which focuses on the molecular factors that regulate genome activity. Lawrence Holder, WSU professor of electrical engineering and computer science and co‑investigator, will collaborate with Skinner using machine learning to help develop predictive epigenetic biomarkers.

Skinner has repeatedly identified circumstances in which environmental factors have induced epigenetic activity, affecting health generations after an individual is exposed. His first multimillion-dollar grant from the Templeton Foundation in 2014 supported the investigation of environmental epigenetics as an additional causal factor for disease.

“Dr. Skinner’s research may contribute to more accurate prediction and interception of diseases before they develop, potentially leading to breakthroughs in preventative medicine and health care,” said WSU Vice President for Research Chris Keane. “His cutting-edge collaboration with Dr. Holder is among the many exceptional examples of interdisciplinary research occurring across WSU everyday as we continue our drive to be recognized among the nation’s top 25 public research universities by 2030.”

Skinner’s research will focus on developing epigenetic biomarkers that might be used to detect one’s susceptibility to disease. The work will in effect be a proof of concept for the technique, which he will first use on autism, the male urethra disorder known as hypospadias, premature birth and congenital heart disease.

Holder, an expert in artificial intelligence and machine learning, will apply recent breakthroughs in deep learning methods to Skinner’s data to more accurately predict susceptible regions of the genome, better understand what genomic features are correlated with epigenetic effects, and increase the accuracy of identifying epigenetic biomarkers.

Founded in 1987, the John Templeton Foundation offers grants in support of research and public engagement in six major funding areas. They invest in bold ideas that cross disciplinary boundaries and challenge conventional assumptions.