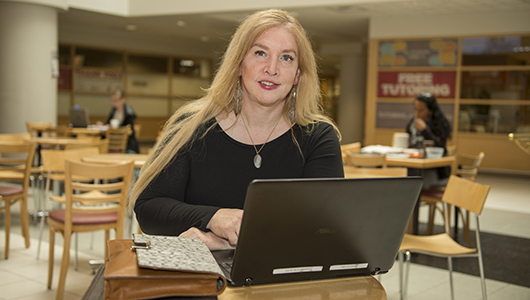 Nella Ludlow, director of the WSU data analytics degree program, knew who she really was from an early age. “As I got older, I thought, I just can’t do this anymore,” she says. So she came out as a transgender woman.

After earning a degree in math and physical sciences at Washington State University, the 1982 graduate joined the Air Force. There she trained as a fighter pilot, worked in military intelligence, and earned a doctorate in artificial intelligence from the University of Edinburgh, and did post-doctoral studies at Cambridge University.

She retired at the end of the Cold War and entered the business world at the height of the dot com boom. Ludlow was part of the team that invented wireless ordering devices for the restaurant industry. Later, in Port Townsend, she founded Mobilisa and put wifi on the Salish Sea ferries in 2004. As CEO, she took another tech company public on the NYSE and rang the opening bell at the stock market.

But then she realized it was time for a change—a very personal one. She sold her business and went back to her first passion, teaching. Ludlow’s back at WSU, now as a clinical professor of computer science and director of a new data analytics program.

“I knew at age three,” Ludlow says, referring to her gender identity, “even though I didn’t understand what all that means.” Although she only transitioned last fall—that is, changed her appearance and started telling people she’s a woman—she says, “Everybody’s been awesome about it.”

That isn’t to say it’s been easy. “For years you try to deny it,” she admits, pointing out that 21 percent of all transgender people have served in the military. Ludlow serves on the board of directors of the Transgender American Veterans Association. “Why, we’re not exactly sure. The simple, first guess is that you’re trying to make it go away and so you think if you do something hypermasculine, you’ll somehow make the feelings go away.”

Eventually, though, gender identity needs to find its expression. “Coming out is a non-trivial life event,” Ludlow says. “Having role models helps. If parents accept, the kids will do a lot better.

“I think it was Caitlyn Jenner, formerly Bruce Jenner, whose mom said, I feel like my son has died, but now I have a daughter. I’m not a fan of that line. I’m still the same person.”

Ludlow has heard people claim that Jenner transitioned as a publicity stunt, which exasperates her. She points out that many people don’t stop to consider what it takes to transition. “Jenner went through 11 hours of facial surgery. I did some surgery with the same surgeon, and it was one of the most god-awful, beat-you-up….” She pauses to take a breath. “And removing the beard, hormones don’t do it.” It takes electrolysis, “jam a needle in, then an electric shock,” and hundreds of hours later, you might have a beard-free face.

“There’s a lot of motivation not to do it, including pretty much everything in society. But you get to a point where you say to yourself, ‘I have to be honest.’ So people say, ‘You’re so brave,’” she laughs, “but I don’t know that there are a lot of other choices.”

It’s a “big liberation just to say who you are.”

Coming out as gay, lesbian, bisexual, or transgender is an act of bravery that, one person at a time, has created a community that has lifted itself by its own bootstraps into something resembling freedom. Once a straight person realizes he or she knows a gay or trans person, they tend to become more accepting. And together, out LGBTQ people form mutually supportive communities, one of the most important factors improving emotional resilience, mental health, and maintaining the struggle for social acceptance.

“Society can be welcoming,” Ludlow says. “This is the cool part about the University: when I came out to my students, they clapped.”

Transgender people—like other sexual minorities, and like stigmatized minorities generally—experience greater levels of stress than do members of the dominant culture. Although poor social support and poverty are certainly contributing factors, the major cause is interpersonal prejudice. In one survey, ninety percent of LGB youth reported hearing prejudicial remarks. A similar study found that 60 percent of black Americans experienced stressors ranging from social rejection to housing and employment discrimination.

And then there’s the violence. “I’ve been physically attacked for walking down the street being transgender,” Ludlow says. “I was in Georgetown, in D.C., and this guy was sexually attacking me. But there was a cop car nearby so I thought, I’ll just go over there. But the cops just laughed at me. So I ended up having to get in a fight with this guy who was attacking me.”

She smiles, and adds, “But I’m a glass half-full person. I’ve had other profs and deans come up to me and say, I’ve never met a transgender person before, and shake my hand.”

Ludlow wants to make it easy for the cis community to understand and work with trans people, so she offers Trans 101. “How does my being trans affect you, my co-worker? Hopefully, it doesn’t! Here are three simple rules:

“One: You might be lucky enough to run in to a trans person in the restroom. Statistically, trans people are much less likely to cause a problem; most problems are caused by non-trans people.

“Two: What do you call trans people? John Oliver, the late-night comedian and astute social commentator, said, ‘Whatever they want to be called!’ But people aren’t usually going to be upset if you get it wrong. As long as you try.

“And three: Don’t ask about surgery. That’s inappropriate and deeply private. You wouldn’t ask a non-trans man, ‘Are you circumcised?’”

John Oliver has a great piece about understanding trans people available on YouTube. First and foremost, he says, simply acknowledge that we’re all people. As for bathrooms and all the hoopla around that, he wants us to consider the fact that most of us already have gender-neutral bathrooms in our homes.

“It’s hard to hate people when you know them,” Ludlow says, then smiles and shrugs. “Hopefully, I can be known as a good professor who just happens to be transgender.”