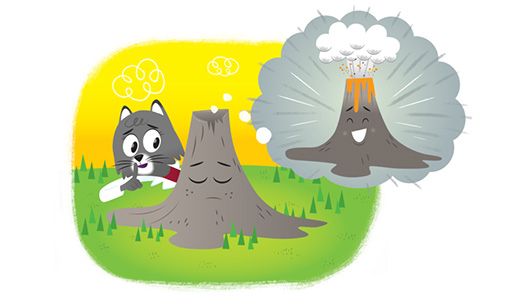 Wherever we find a volcano on the surface of our planet, we can find the source of an eruption beneath it. That’s what I found out from my friend John Wolff, a volcanologist at Washington State University in Pullman.

Our planet is home to all kinds of volcanoes that erupt in different ways. Some eruptions are quiet and continuous, with a slow flow of lava. Other volcanoes erupt explosively and can spew ash and lava hundreds of feet up into the sky. All of this lava has its start underground in the form of something called magma.

Wolff said that scientists used to think there were large pools of hot liquid beneath volcanoes. Now we know it isn’t quite that simple. Magma is not really a liquid, but rather a kind of sludge or slurry. It helps to think of it kind of like honey.

“If you put honey in the cupboard for a long time it will solidify,” Wolff said. “But if you set it in a pan of hot water, you can return that honey to a more liquid state.”

When a volcanic eruption is about to happen, magma near the surface of the earth gets heated up by even hotter magma from below. The hot magma deep in the earth starts to melt the crystals in that magma above and the magma becomes more liquid-like. When this happens, the system is in a dangerous state, said Wolff. The volcano could erupt at any time.

The eruption also has something to do with density. When we talk about density we are talking about how tightly packed together the particles are in an object. For example, if you put an object in water and that object floats, the object is less dense than the water.

Magma from the earth is actually lighter, or less dense, than the rock around it. As the magma starts to rise, bubbles of gas start to form inside the magma and they can’t escape. That also makes the pressure build up in the volcano, makes the magma rise even more, and eventually erupt.

In fact this pressure is one of the things that is a major difference between volcanoes on land and volcanos under the sea. Yep, there are also submarine volcanoes deep in the ocean. In fact, about 75 to 80 percent of volcanic eruptions on our planet occur underwater.

Water pressure can prevent those gassy bubbles from forming in lava, so the explosions under the sea aren’t quite as huge as eruptions on land. Because it is so dark on the ocean floor, it’s harder to see these eruptions. But whether at land or at sea, there’s likely some volcanic activity happening somewhere on our planet at this very moment.