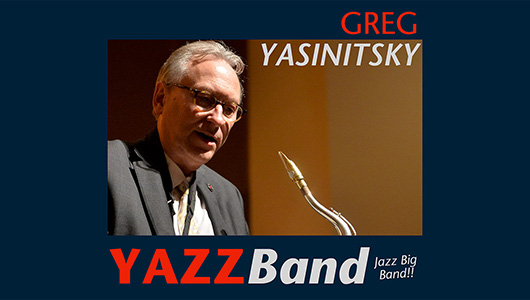 “YAZZ Band,” the recently released compact disc from Greg Yasinitsky, Regents Professor of music, has received significant national attention, including a feature in Down Beat magazine — the “Jazz Bible” — and on the Public Radio International show “Jazz After Hours.”

As of late January, “YAZZ Band” has appeared for 14 weeks on national radio play lists including the North American College and Community Top 30, and Roots Music Report’s Top 50 Jazz Album charts, and the Jazzweek top 50. “YAZZ Band ” was listed as one of the “CDs of the Year – Big Bands” by Bebop Spoken Here in the United Kingdom and the CD has received a number of enthusiastic reviews internationally.

It has also been the focus of numerous positive jazz reviews.

The CD has been listed by iTunes, Amazon, CDBaby, and is streamed on Apple Music and Spotify and other online sites including gregyasinitsky.com.

Tracks are also available on Dropbox: listen to and download tracks.