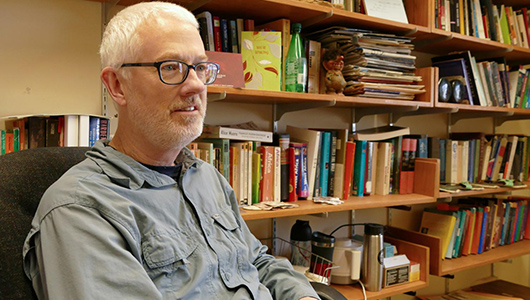 In the 21 years English professor and author Peter Chilson has been at WSU, he has published four books and numerous journal articles. He’s also helped build a creative writing program that now includes a campus literary arts journal called “LandEscapes.”

Back in 1998, Chilson noticed an opening at WSU for a creative writing instructor specializing in creative non-fiction and applied for the job.

“I also happen to love teaching, so it’s been a very, very good fit for me,” Chilson said.

Since he was a child, Chilson has enjoyed writing. While he has considered other careers, such as being a diplomat, writing has always stayed at the forefront of what he wanted to pursue.

“I’ve been writing stories since I was a kid, I’ve always kept a journal — on and off anyway. I’m a compulsive note-taker and I’ve always been a heavy reader for as long as I can remember,” Chilson said.

Before he was a professor at WSU, Chilson traveled and worked in West Africa as a Peace Corps volunteer from the mid-1980s until 1994.

As a new Syracuse University graduate, Chilson wanted to travel and write, much like his literary mentors Martha Gellhorn and Graham Greene. However, with no money and no desire to join the military, Chilson decided to join the Peace Corps.

“I had a basic foundation in speaking French, so I applied to go to French West Africa because I thought that was an area where I had the best chance of acceptance,” Chilson said. “Also, there was a lot going on in Africa at that time that I was interested in.”

Chilson ended up being placed as a high school English teacher. While there, he experienced an event that forever changed him.

One day in class, a student named Humza collapsed from a cerebral malaria hemorrhage. Chilson, knowing that Humza was a “cut up,” yelled at the student because he initially believed he was messing around.

“What happened in front of me that day was not him cutting up, he was actually having a seizure and it was the last conscious thing that happened to him before he collapsed on the ground in a malarial hemorrhage,” Chilson said.

Chilson recalled other students watching and making fun of Humza and himself as he administered first aid. The young man died the next morning.

“It took me many, many years to write about this, and I use this in class as an example of writing memoir, but also I tell my students to really put themselves in the very, very center of their experience and to really recognize their own culpability in situations,” Chilson said. “The circumstances of his death — there were things going on in his life which I didn’t know of at the time, but I learned about them later and it really showed me how much we misunderstand in the way we walk through life every day if we don’t think about things.”

The traumatic experience inspired Chilson to self-reflect and analyze his own flaws.

Chilson has worked extensively in Africa, specifically in the country of Mali. While writing an essay, he tracked down a dangerous jihadist warlord’s personal story, and while he never met the warlord — “If I had, I wouldn’t be here right now,” he said — he was able to successfully tell the story. Chilson didn’t do it alone; he also had his friend and “fixer” Isaac Sagara assist him. For Chilson, selling the essay felt like the end of a chapter in his life.

This is particularly poignant since Chilson was in Mali in 2012 during the early months of the civil war. Once again assisted by Sagara, Chilson was one of the first Western reporters to travel up to Central Mali, which was very dangerous even in 2012.

“There was a kind of frontline there between the nationalist and jihadist forces that took over the north as they faced the government forces in the south,” Chilson said. “I was able to travel that borderline between the two sides.”

Chilson wrote an e-book about his experience during the beginning of Mali’s civil war titled “They Never Knew Exactly Where: Dispatches from the Lost Country of Mali.”

Now 57 years old, Chilson says one of the most important lessons he’s learned in life is humility.

“I think we all make mistakes and say things and write things that we regret later on, but I’ve learned that as a writer, one of the best things that I can do in learning about the subject I’m writing about is to walk into the situation with great modesty and to not be afraid of admitting what I don’t know,” Chilson said. “And as a middle-aged white male in the world at this time, I think that’s a very important lesson that we all have to learn.”

By Trinity Pierce for The Daily Evergreen