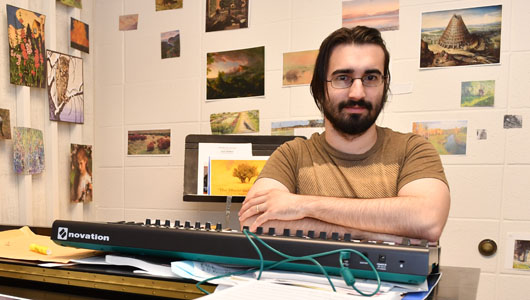 Cuban-born master’s student Raul Blanco has long been interested in combining Cuban music with other types of music, such as Scottish bagpipes. But combining Cuban music and jazz piano is special because it bridges his years of learning classic piano in his homeland with his personal interest in jazz.

“Raul has written music for several ensembles and has led both our Latin Jazz ensemble and Jazz Wires, our top jazz combo. He is an excellent teacher and mentor to undergraduate students in the School of Music. We are excited to see where Raul’s work ethic and talents lead him in the future,” said Brian Ward, Raul’s advisor.

According to Raul, Cuban music is “rich and complicated in rhythms,” just as many other types of Latin music are. Thus, when Cuban music is integrated into jazz piano with the swing as one of the major features, a rhythmic richness is created. (Listen to Raul play a combination of Cuban music and jazz piano.)

His first Cuban/jazz composition, Finding Destiny, “conveys a feeling of uncertainty,” he said. “This was because when I created it, I had just arrived at WSU and started my master’s degree, which made me feel a little bit worried about whether I could adapt to my new life.”  (Click on the YouTube video below to listen to the composition and see Raul at the keyboard.)

Raul’s grandmother was a piano teacher and cultivated a great zeal in him for playing piano. He began playing when he was 7 years old, and in third grade was selected to attend a music school in Cuba, where he received systematic education in classical piano. It was there he also discovered jazz. Raul was fascinated by the melody made by jazz as it was distinct from that produced by the classical piano.

“Jazz is vivid, dynamic, and full of energy, passion, and ‘voices’ from the player,” said Raul about his first impression on jazz. With a desire to learn more about jazz, he was disappointed that he could find little information about the music style in Cuba.

“We had no textbooks about jazz in Cuba,” said Raul. Consequently, he could only search for audio files and try to imitate what he heard.

When he moved to Houston in 2008, Raul was excited that he now had access to as many resources about jazz as he dreamed possible. This helped him develop his professionalism in jazz music, and inspired him to pursue a master’s degree in jazz studies at WSU. He had already earned a B.A. in music performance with emphasis in classical piano at Texas Southern University and had had a few jobs playing piano in the Houston area.

Raul considers the most difficult part of the combination is to figure out an appropriate way to add notes to original melodies in order to express his own emotions as well as to reach listeners. In his opinion, different ways of adding notes to even the same melody would result in different listening experiences for his audiences.

He recalled the experience of creating his composition, Love and Thoughts.

“To express my feeling, I tried uncountable, various ways of adding notes to the original piece, another beautiful composition I created one year ago,” said Raul. “I also took other things into account, such as the harmony of the melody, because I did not want any branch to harm the entire harmony of the music.”

Raul also believes the combination matters to the music field of Latin jazz. He wrote his master’s thesis, Ready Defining the Latin Jazz, to discuss his experience of combining Cuban music and jazz piano as well as teaching students in WSU’s Latin ensemble.

In the past two years, Raul has created 31 official compositions, including five classical pieces and 26 jazz pieces. He and his six-person band called Jazz Wires have produced three albums. The song Heartbreaker from their third album, Land of Giants, has received more than one thousand views on YouTube.

Raul and his band were often invited to music festivals and concerts both on and off campus. At the 2019 Lionel Hampton Jazz Festival, Raul won first place in piano solo performance and Jazz Wires was one of the ensemble winners.

Raul received this year’s Master’s Student Achievement in the Arts award from the College of Arts and Sciences in April and graduated with a degree in jazz studies in early May. As Raul prepares for the next phase of his life, the emotion he seeks to express through his music changes.

“On one hand, as I will leave WSU very soon, I believe I will miss my time here. On the other hand, I plan to go back to Houston for some music education work, so I look forward to my new journey there,” said Raul. “Therefore, my current music expresses the two feelings, showing my love for WSU and expectations for the future.”

Adapted from post by Yue Huang for WSU Graduate School