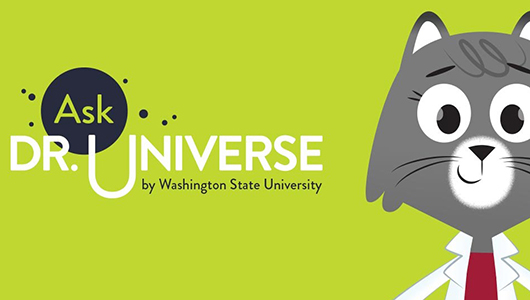 Our moon is one of the brightest objects in the night sky. But unlike a lamp or our sun, the moon doesn’t produce its own light.

Light can travel in lots of different ways. Moonlight is actually sunlight that shines on the moon and bounces off. The light reflects off old volcanoes, craters, and lava flows on the moon’s surface.

That’s what I found out from my friend Julie Menard, a geologist and researcher at WSU who studies what makes up the rocky planets in our solar system.

If you look through binoculars or a telescope, you might even be able to see some lunar rays coming out of the moon’s craters, she said. These craters are places where asteroids or meteorites hit the moon long ago. The rays are formed by rocks and dust and other stuff that got blown out of the crater by a meteorite. You might also see some lighter, brighter spots on the moon, which are signs of newer impacts.

Menard also reminded me about a common object a lot of us use: mirrors. She said that during the Apollo missions, astronauts actually left behind some mirrors on the surface of the moon.

The moon landing was 50 years ago, but the mirrors are still up there helping us learn new things. These days, scientists can use lasers and those mirrors to help us measure the distance between the moon and the earth. There’s about 238,900 miles between us.

You may have noticed that it can look like part of the moon is missing at times. But don’t worry, it’s always there. There are eight phases: new moon, waxing crescent, first quarter, waxing gibbous, full moon, waning gibbous, last quarter, and waning crescent.

When I look up to the moon, sometimes I see different shapes in it like a face or a smile. In Chinese and other Asian cultures, there is even a story about a rabbit on the surface of the moon. These shapes that we see in the dark and light parts of the moon are known as lunar pareidolia, a word that means our minds find meaningful shapes where there are none.

If you’re anything like me and enjoy watching the night sky, you might even try tracking moon phases yourself. All you’ll need is something to write with and a piece of paper. Each day, draw a picture of the moon and see how its reflection changes.

As you see the moonlight shine down and illuminate the night sky, remember that this night light wouldn’t be possible without help from the biggest object in the solar system—our sun.