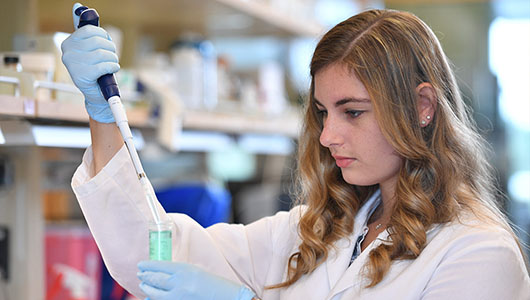 The National Institute of General Medical Sciences at the National Institutes of Health has awarded the WSU NIH Protein Biotechnology Training Program $2.3 million over the next five years to support training of Ph.D. graduate students. Renewing this competitive grant brings the total NIH investment into the program to more than $10.4 million since it began in 1989 as one of the first nine NIH training grant programs in biotechnology.

The NIH grant provides highly competitive stipends, tuition and other support for 10 students per year during their first two years of graduate study. After their second year, the students transition to funding tied to their research but still remain part of the program. The grant is part of a broad partnership in biotechnology between NIH and five WSU academic degree programs (molecular biosciences, chemical engineering and bioengineering, immunology and infectious diseases, molecular plant sciences, and chemistry) located in four WSU colleges.

Interdisciplinary students in the College of Arts and Sciences’ School of Biological Sciences are also active participants in the biotechnology training program.

“This nationally competitive program is the only biotechnology training program that has been funded continuously since 1989. WSU’s program is unique in bringing together talented researchers and students from diverse areas and has fostered several collaborations, including working on problems related to wound healing, large scale protein production and cultivating fastidious pathogens like the bacteria that cause citrus greening disease,” said Michael Kahn, the current director of the program and a professor in the molecular plant sciences program. “More than 150 Trainees have participated in the program and 45 are currently working toward their Ph.D. degrees.”