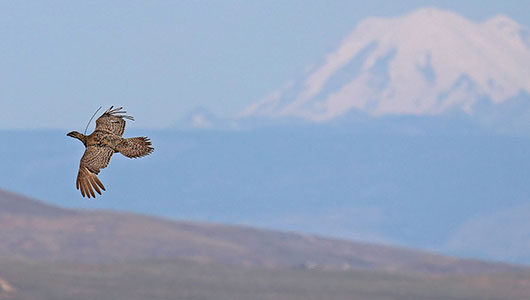 Moving can be tough, but eventually most of us acclimate to new surroundings. That’s true for humans, and research from Washington State University shows it’s the same for sage-grouse too.

A team of scientists successfully moved sage-grouse, a threatened bird species in Washington state, from one area of their range to another to increase their numbers and diversify their gene pool. A WSU study on the project in The Journal of Wildlife Management shows relocating the birds is a viable and productive step towards helping their population recover in the state.

“In the first year after moving sage-grouse in, they tended to move around a lot and didn’t reproduce as effectively as the native population,” said Kyle Ebenhoch, a researcher now working at the U.S. Geological Survey (USGS). “It took them about a year to settle in and get used to their new surroundings.”

Ebenhoch, a WSU graduate student during this project, wrote the paper with WSU School of the Environment professors Daniel Thornton, Lisa Shipley, and Jeffrey Manning. Kevin White, a contract wildlife biologist with the Yakima Training Center at Joint Base Lewis-McChord, was also a member of the research team.  The training center hosts a population of sage-grouse where the relocation work was done.

An adjustment period
Ebenhoch wanted to investigate how newly introduced sage-grouse would survive and reproduce in order to determine if relocating birds to the area could be a workable way of keeping the species from further decline in Washington.

It turns out, the birds can adjust, though the training center population continued to decline.

“The birds did adjust to their new surroundings, but it didn’t stabilize the population,” Ebenhoch said. “This can be one tool in our toolbox for helping, but we’ll need more research to find other tools as well.”

As for how the birds adjust, it’s not too far off from a person or family moving to a new state.

“It reminded me of me when I go somewhere new,” Ebenhoch said. “When I move to a different area, I know where my home and work are. Over time, I start to find a grocery store, or a barber. My knowledge and home range expand as I get used to the new place. It’s basically the same for these birds.”

Studying the birds
The relocated birds, brought in from populations in Oregon, Idaho, and Nevada from 2004–2006 and 2014–2016, were fixed with radio-transmitting collars so Ebenhoch and his colleagues could track their movements and see if they survived in their new area.

The researchers also collared several native sage-grouse each year, to serve as a baseline on how much those birds move around and reproduce. That comparison produced conclusions about the one-year adjustment period.

The collars also had a “mortality signal” built in, so researchers would be notified if a bird perished while wearing a collar. This allowed the team to monitor the mortality rate of the native and transplanted birds.

A necessity
Due to several factors, mostly human-caused like agriculture habitat conversion or wildfire, populations of sage-grouse in Washington have shrunk and become fragmented. There are four central and eastern Washington areas where the birds live, but they can’t intermix because these areas are too far away from each other. That leads to inbreeding and less genetic diversity at each area, potentially increasing diseases and abnormalities, which are important factors that biologists monitor when conserving rare or declining wildlife.

Ebenhoch hopes the paper, which was his thesis for his Master’s degree from WSU, will help policy makers and other wildlife biologists see that relocation can work. Though the paper is specific to Washington sage-grouse, some of the techniques may be suitable for sage-grouse conservation in other states, or even other species.

“This bird is right on the brink of being listed as threatened at the federal level,” Ebenhoch said. “We showed that relocation, while disruptive in the short term, can work once the birds acclimate to their new surroundings.”

Top photo: A female sage-grouse flies over the Washington sage steppe with Mount Rainier looming in the background. Photo courtesy of Tatiana Gettelman.