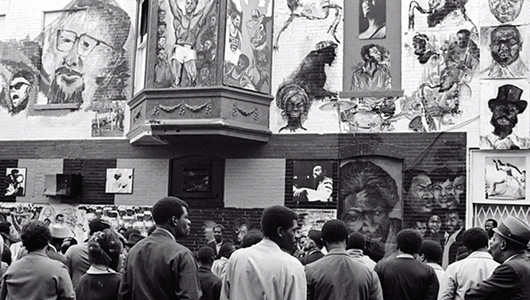 Two WSU Vancouver professors have chronicled one of America’s preeminent artistic and cultural movements in a new film. “BAM! Chicago’s Black Arts Movement” introduces viewers to more than a dozen writers, artists, musicians and community organizers who were instrumental in the campaign centered on black pride and aesthetic. People like poet Eugene Redmond, musician Mwata Bowden and Dr. Safisha Madhubuti, who founded four African-centered schools and went on to teach at Northwestern University, retiring in 2018.

“BAM!” is the brainchild of Thabiti Lewis, who met many of the important figures in the movement in his 20s while working for Third World Press in Chicago, founded in 1967 as a platform for black literature.

“They were committed to making a positive impact in their community,” Lewis said of the movement’s leaders. “The Civil Rights struggle reached its apex during the Black Arts Movement and people in Chicago were concerned with the community’s needs in terms of resources and creating art that impacted the souls, minds and spirits of those around them.”

Among the movement’s most influential contributions was the Wall of Respect, a mural featuring heroes of the black community. W.E.B. Du Bois, Malcolm X and Ray Charles are among the more than 50 individuals depicted on the two story mural painted on the side of a tavern on 43rd Street and Langley Avenue.

The Wall of Respect inspired many murals in cities across the country, a vivid example of Chicago’s influence on the cultural movement happening across the country through the 1960s and into the 1970s. Influence also came in the form of publications like Ebony and Jet – focused on lifestyle – and Black World, which was initially modeled after Readers Digest and transitioned to the discussion of serious cultural arts and ideas under the direction of Hoyt Fuller.

Initially, Lewis planned to chronicle Chicago’s Black Arts Movement with a book – an underwritten subject in his view – particularly as it neared its 50-year anniversary. In the midst of that project, Lewis realized the interviews he was planning could be recorded and used in a documentary film.

The trouble was, he’d never made a film. And so he called up his colleague Pavithra Narayanan and begged her to take on the task with him.

After getting a grant from WSU, the pair headed to Chicago to conduct interviews. They’d barely found their luggage when they headed out to their first interview. As they conducted more and more interviews, Narayanan was taken aback by the sheer volume of stories being recalled.

“They were so excited to share that history,” she said. “We’d plan for a half hour interview and it would go on for two hours. I was really grateful that the people were so gracious. They gave their time to this outsider and they were so welcoming. It was truly a phenomenal experience.”

When they were done, Narayanan had between 30 and 40 hours of interview footage to go through. She then undertook the monumental task of editing the material down to an hour-long documentary.

The pair hope viewers walk away with a new appreciation and understanding of the movement and how it influenced black culture in the decades that followed.

“The hope is also that viewers can take this history, this knowledge and use it to become change-makers in the mold of those who shared their stories in the film,” Narayanan said.

The film was screened at WSU Vancouver on Sept. 10 and at the Pullman campus on Sept. 11. A Q&A sessionss with the filmmakers followed scheduled to both screenings.

Watch a trailer for the film on Vimeo.

Top photo: The Wall of Respect, painted in Chicago during the Blacks Art Movement, inspired murals in cities across the United States.

By RJ Wolcott for WSU Insider