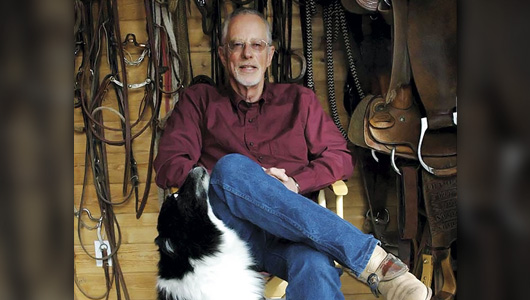 His canvases are mostly covered with cowboys and horses now, along with their accompaniments—saddles and chaps, barns and fences, cows, canyons, rivers, red rocks, ropes—all things he’s loved from an early age.

Don Weller (’60 Fine Arts) worked for decades as an illustrator and graphic designer before making a second career of painting images of rodeos and ranches and, in a sense, getting back in touch with his roots. “Searching my earliest memories, I’m not sure I ever believed in Santa Claus, but I know I always believed in cowboys,” he writes in Tracks: A Visual Memoir.

In his new, 200-page book, Weller details his artist’s life through original works, a color-coded timeline, and vignettes divided into three parts: Making Marks, Having Adventures, and Leaving Tracks. He describes his childhood and college days in Pullman; his early career designing posters, advertisements, and record and magazine covers in Los Angeles; and his return to the countryside with a move to Utah. “My life began shy and unsure, with narrow interests, spending many hours alone with a pencil or brush or horse. And that is still me,” he writes.

Weller grew up in the rural West in the 1950s—“at 416 Illinois Street, at the corner of Monroe, on the north side of College Hill,” to be precise—and fondly remembers sledding down Monroe Street in winter and fishing at Twin Lakes in summer. His dad, Harry C. Weller (’23 Arch. Eng.), taught architecture at Washington State College and, the artist writes, “since the town was so tied to the college, enrolling there was just the natural order of things.”

Initially, Weller aimed to become a veterinarian. “I thought that’s what you did if you wanted to be a cowboy and your dad didn’t own a ranch,” he says. “When I was a little kid, before high school even, I found out where the college rodeo club practiced, and it wasn’t too far from our house, probably two miles away. I rode my horse there and watched them. Pretty soon they showed me the ropes. When I got to college, as soon as I signed up for my classes, I signed up for rodeo club.”

He quickly learned he preferred riding and drawing to taking science classes and switched his major. WSU drawing teacher Ed Poulsen was a great influence. “He told our class if you wanted to learn to draw, you better carry a sketchbook everywhere you go and use it. Because of him, I carried a sketchbook for the next 30 years and filled tons of them. I would draw in airports if I was traveling. I would draw people in meetings. I would draw everywhere, draw, draw.”

But, he writes in his memoir, “Without someone to write checks, art is just a hobby.” So, after graduation, Weller sold his horses, moved to Southern California, and spent the next several decades doing graphic design and illustration. “The spirit in LA’s best design offices was competitive, and far from 9 to 5,” he recalls. “We wanted interesting creative solutions for our clients and worked night and day to produce them.”

Weller became known for his creative ideas and visual solutions. Eventually, he started his own design firm and created posters for the Hollywood Bowl, Rose Bowl, National Football League, and 1984 Olympic Games. And he did some part-time teaching too—three years at UCLA and 11 years at the Art Center School in Pasadena.

The ’60s and ’70s were “an intoxicating time for West Coast designers,” Weller says. “Clients were realizing the merits of good effective problem-solving design and were willing to pay for it. We treasured good clients and competed for them. Graphic design was coming into its own all around us, a golden age. In New York and LA, design was developing its sophistication in a clean, corporate way, but on the West Coast we also had Hollywood and the entertainment industries that needed more flamboyant, innovative, and colorful solutions. That was our challenge, and we loved it.”

“Looking back, my interest all the way through has been drawing and ideas,” he says, noting he’s thoroughly enjoyed both of his careers, first producing art for commerce and now painting images of the West. After the cement and palm trees of Southern California, he says he’s glad to be horseback again, among cowboys and cutting horses.

Home is Oakley, Utah, about seventeen miles northeast of Park City, where he lives with his wife Chikako, known as Cha Cha. Weller still paints “pretty much every day,” some days as long as ten hours. He uses watercolors or oil paints to capture the same images that intrigued him as a young boy on the Palouse. “I kind of feel time is running out,” he says. “The last few years, I’ve had this really strong urge to paint.”

See more of Don Weller’s work on his website.

Top image: Weller at his home.