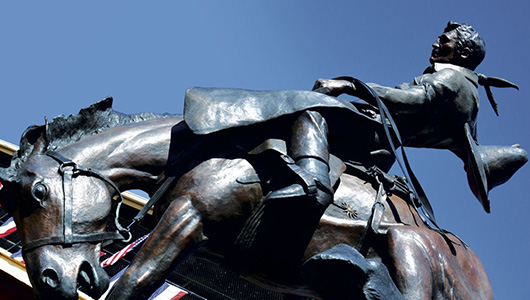 In September, competitors in northeast Oregon’s 109th Pendleton Round-Up took part in one of the world’s most famous and colorful rodeos. Set in a wide valley pressed up against the Blue Mountain foothills, the small city of Pendleton has hosted the Round-Up since 1910, a rodeo voted best in the United States for four years running.

Much of the thanks goes to the 1,100 volunteers, including a group of highly engaged Cougar alumni, whose teamwork and hospitality make the Round-Up and Happy Canyon Indian Pageant and Wild West Show a dazzling display of Americana.

The notable achievement is also based on the Round-Up’s generous community spirit and focus on animal and human welfare.

Throughout the week, certain days are dedicated to charitable causes. For the last three years, opening day at the Round-Up has been christened Farmers Ending Hunger Day to help promote awareness of food insecurity in Oregon.

Ziari also happened to be friends with Casey Beard (’71 Poli. Sci.), who served with General Norman Schwarzkopf during Operation Desert Storm. Beard was hired as the Round-Up’s first general manager in 2014, a time of rapid growth, upgrades, and increased commitment to the community.

“We were looking for ways to contribute and Farmers Ending Hunger was a good organization,” Beard says. “I approached the boards and they agreed to make it an official charity.”

The nonprofit aims to increase the amount of high-quality food available for local communities through a partnership of farmers, food producers, the Oregon Food Bank, and the public. Member farms regularly donate grain, livestock, or fresh and frozen produce. Others give food or chip in cash to “adopt” acres of dedicated farmland.

A $250 donation to the Adopt-an-Acre program, for example, will provide a serving of pancakes for 2,300 families of four. So far, the Pendleton Round-Up has adopted twenty acres of farmland to help fight hunger.

“It’s been a great partnership,” says Beard, who retired in 2019. “Farmers and ranchers who donate food do this out of a tradition of stewardship of the land and community and of course, that’s a WSU virtue. They aren’t doing it for the publicity. They do it because it’s the right thing to do.”

Ziari, whose family farmed in northern Iran for over a thousand years, says he became aware in 2006 that Oregon was number one in hunger in the United States and had been in that position for decades.

“It came as a big surprise to me that we live in one of the richest agricultural areas in the world and have 300,000 citizens in Oregon who have to use food banks just to eat, and 30 percent are children,” he says.

“The problem with hunger is it’s hidden. No one associates Oregon with hunger and Washington is not that far behind.”

According to the Oregon Food Bank, 14.6 percent of state citizens lack access to a sufficient quantity of affordable, nutritious food. Relatively high costs of rent, food, gas, and utilities combined with long-term unemployment or persistent underemployment are cited as causes.

“Once I learned about that, I started meeting with farmer friends in the Hermiston area and asked if they knew this,” says Ziari. “Most said no. Then, I asked if they’d be willing to donate a percentage of their farming production for hunger relief—purposely plant food that can be used to eliminate hunger. Virtually all of them said yes.”

The first farmer Ziari reached out to was Tyler Hansell (’70 Ani. Sci.). Though Tyler has since passed on, all five of his children now actively support Farmers Ending Hunger. The three brothers, TJ (’01 History), Kenzie (’04 Ag.), and Luke (’09 Ag. Busi.) donate beef, wheat, and cash from their farms.

Kenzie is on the Farmers Ending Hunger board of directors and also manages publicity for the Happy Canyon Night Show.

“When Fred first called dad about the idea, he didn’t hesitate,” says Kenzie. “Dad said, ‘If you need shoes, you go to a shoe store, and if you need food, you go to a farmer.’”

To date, Farmers Ending Hunger has donated over 25 million pounds of product to the Oregon Food Bank, based in Portland, which distributes it through a network of regional food banks in both Oregon and southwest Washington, says Ziari.

Seventy percent of donations come from Umatilla County within 75 miles of Pendleton.

“One farmer will give 20–25 cows each month that we turn into hamburger and distribute,” Ziari says. “Another farmer gives thirty tons of potatoes every month of the year and another gives 25 tons of onions. Other farmers give peas, beans, carrots, cherries, hazelnuts, watermelon, and it’s done on a regular monthly basis.”

“The rural and urban are coming together and taking care of each other. If everybody does their part, the sky’s the limit. Just like how Cougs take care of other Cougs.”