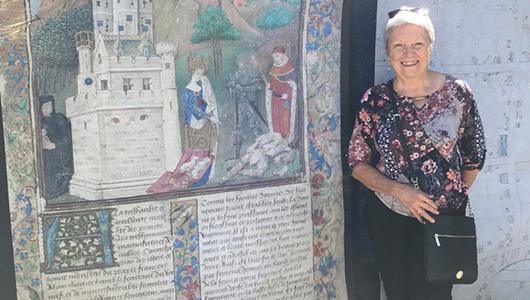 Where in the world had the Clumber Park Chartier disappeared to? Joan Grenier-Winther, a Marianna M. and Donald S. Matteson Distinguished Professor of Foreign Languages at WSU Vancouver, really needed to examine the fifteenth-century collection of poems by Alain Chartier and others.

After all, her critical edition and translation of an unusual poem of the era was about to be published, and the Clumber Park manuscript had a version she hadn’t yet seen.

Before printing presses were invented, manuscripts were copied by hand. Mistakes could creep into one copy, and then be reproduced by scribes in subsequent copies. Grenier-Winther had examined all the known copies, or witnesses, as they’re known by professional medievalists, of “La Belle dame qui eust mercy” she was editing—all except the one in the Clumber Park Chartier.

“From the beginning of the 20th century,” Grenier-Winther says, “a lot of people have mentioned this manuscript: they knew it was beautiful and contained the poems of Chartier. The contents were cataloged. I asked scholars in Europe if they had any clue where it was, but no one did.”

She contacted a rare book dealer in London, Maggs Brothers, “and they said, ‘Yes, we sold it in 1937, for 1600 pounds.’ But all they had for the buyer were two letters: BU.” Clumber Park was the ancestral home of the Dukes of Newcastle, and the Chartier manuscript was sold after the death of one of the dukes.

Grenier-Winther figured the illuminated manuscript had been sold to an institution, so she started writing letters—to Boston University, Baylor University, Beirut University, “to every BU I could think of, but nobody had it.”

Her search for the missing manuscript led Grenier-Winther back to the big auction houses. In 2016, she contacted Christie’s of London but, again, they knew nothing. Then, a year later, she got a note from a salesman who told her the Clumber Park Chartier was being bought by an institution—but that he couldn’t reveal any further details.

Fortunately, the salesman helped her obtain a digitized version of the poem she needed to examine for her critical edition, and so Grenier-Winther was able to include the variant readings in her publication.

Soon after, Yale’s Beinecke Library proudly announced their most recent acquisition: the Clumber Park Chartier. The “BU” of 1937 turned out to be Maurice Burrus, a collector in Strasbourg. Burrus was an Alsatian tobacco magnate, politician, and philatelist. His stamp collection was considered one of the greatest ever assembled and included some of the world’s rarest stamps.

As soon as Grenier-Winther heard the news, she contacted Yale and obtained permission to examine the manuscript in person. “This summer was the first time I had ever seen this absolutely gorgeous manuscript itself. It contains more than a dozen finely executed illustrations, grand flourishes of flowers and beasts, in brilliant color, many highlighted in gold leaf.” Indeed, the manuscript was illustrated by the Dunois Master, “the leading painter in Paris,” according to Yale.

Alain Chartier, born in 1385 and a contemporary of Chaucer’s, was a knight-poet who, during one of the generation-long lulls in the Hundred Years’ War, wrote love poetry. He’s best known for a poem called “La Belle Dame sans Mercy,” the lady without mercy, who refuses all entreaties from her would-be lover. The phrase has become part of the English language, thanks in part to a boost from the much later Romantic-era poet, John Keats, who wrote a ballad with the same title. And several of the Pre-Raphaelite painters, including Rossetti, Waterhouse, and Dicksee, painted versions of Chartier’s influential merciless lady.

In Chartier’s day, the chivalrous notion of a knight begging on bended knee for the favors of a lady was a common theme. The motif was used by many poets of the era but, in almost all the Belle Dame poems, the lady is “sans mercy.” “La Belle dame qui eust mercy” is an exception, Grenier-Winther says, because here the lady “who had mercy” does offer her consent. No one knows who wrote this variation of the venerable theme, and in fact the one in the Clumber Park Chartier (which is, in fact, an anthology of poems by various authors) may have more than one author.

Grenier-Winther points out that a lot of manuscripts produced in the early 15th century were not illustrated. They were produced for a growing middle class who wanted entertainments but weren’t wealthy enough to afford to have their manuscripts illustrated. Often copied onto paper instead of parchment, Chartier and his Middle French contemporaries’ poems circulated widely. The Clumber Park manuscript, of course, is special. As Grenier-Winther points out, “This deluxe manuscript was executed in France in about 1430 for a lady whose initials, AA, appear in every border. ‘AA’ may have been Anne de Beaujeu, the daughter of King Louis XI.

“What’s interesting,” Grenier-Winther continues, “is that I’ve used these types of poems in courses. These love poems written as long ago as they were are so contemporary. The wording could be taken from any pop love ballad on the radio, even rap. The lover–he can’t eat, he can’t sleep, his heart is palpitating, all he thinks about is the lady!

“And the students were always amazed that nothing’s changed! And I was too. Before I got into it, I was put off by the thought of medieval lit, I thought it would be so far removed from my life. But reading these poems you realize that nothing changes, you fall in love, your innards flip-flop. It’s all the same and that’s kind of cool.”

In fact, she says, you can go back much further to find declaration by love-tormented poets. Grenier-Winther mentions a famous example by the 1st century B.C. Latin poet Catullus. Known simply as Catallus 85, and written for his lover, Lesbia, is short and to the point: “I hate and I love. Why I do this, perhaps you ask. / I know not, but I feel it happening and I am tortured.”

“And that little two-line poem sums up the feelings that you have when you fall in love,” she says. Years after teaching that poem in a class, she got a letter from one of her students. Included was a photocopied page from Cosmopolitan with a reference to Catullus, which the student had circled, writing, ‘I knew who Catullus was!’ That was a special moment that demonstrated the very real human connection between past and present.”

Top photo: Joan Grenier-Winther stands outside the Yale University Beinecke Rare Book & Manuscript Library near a construction barricade decorated with some of the Library’s holdings—including an image from the Clumber Park Chartier.