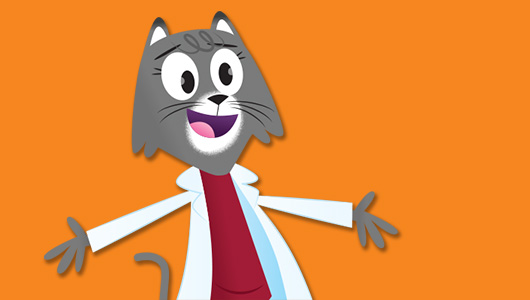 Humans come into the world crying, but that’s actually a good thing. In a way, babies start communicating from the moment they are born. Of course, it can be hard for their caregivers to know exactly what they mean with all those cries.

I learned a lot about how babies use emotion to communicate from my friend Masha Gartstein, a professor of psychology at Washington State University. She told me that crying is just one way babies communicate. After two or three months, babies will usually start to smile with a purpose.

It takes some time, but caregivers can learn to pick up on what different cries are signaling. For example, a baby might be hungry, need a diaper change, or just be uncomfortable.

After babies are born, many will be given a test to see how they react to things in their environment. A baby might even get a gentle pinch or have some boogers softly sucked out their nose to see how they respond.

The person giving the test, usually a doctor, will look to see if the baby pulls away, sneezes, coughs, or twists their face into an expression we call a grimace.

Still, a cry or grimace doesn’t always mean there is a problem. Sometimes babies will cry because they are having a hard time settling down, but if left alone, will figure out how to soothe themselves, which is a good skill. They might suck on their thumbs or distract themselves.

“It’s an amazing thing,” Gartstein said. “That becomes another way of communicating.”

It’s also a nice relief for caregivers, or a baby’s brothers and sisters, especially after hearing lots of crying for a few months. Babies and caregivers can now both communicate joy or happiness.

At about six months old, babies can usually respond to their own names. But they still can’t talk like kids and grown-ups.

Instead, they might use gestures or point at things to communicate ideas to others. They might use their hands, fingers, or bodies to send out a message like, “I want that toy!” or “Look what I did!”

When a baby is about twelve months old, they will start to put together sounds that make up words like “mama” or “dada.” All the while, the baby’s personality is developing, too.

Gartstein also told me about something she studies called temperament. It’s a combination of the emotions and behaviors we each display that are reactions to our experiences or attempts to regulate these reactions.

Perhaps, you are a very calm person or maybe you get easily stressed and angry. These kinds of temperaments often begin when we are babies.

In Gartstein’s lab, she sees lots of different expressions and emotions on the faces of babies who come to visit with their families. The babies even wear little swim cap-like hats with little electrodes that help the researchers learn about their brain activity.

Babies don’t just have the ability to communicate, but sometimes they can help us do science and learn about human nature.