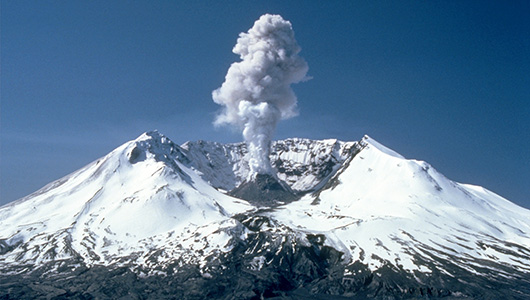 In the days after Mount St. Helens first erupted—sending some 540 million tons of ash over an area of 22,000 square miles—WSU ecology professor Richard “Dick” Mack was already thinking of its potential research value.

“It wasn’t research that I intended to do,” Mack says, “but there was a unique opportunity and it would be remiss of me to ignore it.” He and a group of graduate students spent the summer of 1980 doing field work between Pullman and Vantage, studying the effects of the ash on vegetation—particularly native plants, such as certain willows and grasses.

The ash that blew eastward over the Yakima Valley and Palouse provided researchers like Mack, now a professor emeritus in WSU’s School of Biological Sciences, with the material with which to experiment. For about five years or so after that, he and his students—using funding from the National Science Foundation and samples collected in Yakima and on the rooftops of Eastlick and Heald Halls—conducted further research. In the ash of Mount St. Helens, Mack says, “there are a lot of lessons.”

More monitoring and awareness
Not only was the eruption a defining moment in a global movement to better monitor volcanoes, the blast zone itself created a sort of outdoor laboratory for scientists to study nature’s regeneration.

“Mount St. Helens was important because it was so well observed, and it spurred investigations of volcanoes in the Cascades,” says volcanologist Don Swanson (’60 Geology), a founding member of the Cascades Volcano Observatory in Vancouver. He worked on Mount St. Helens until 1990. Today, he’s a scientist emeritus at the Hawaiian Volcano Observatory, part of the U.S. Geological Survey (USGS).

“I think we’re in a much better position to monitor Cascade volcanoes than we ever have been, and it goes back to Mount St. Helens in 1980,” Swanson says. “That was really a turning point. From a tragedy, you learn a lot—which can help mitigate problems down the road. Existing observatories got increased funding, and people learned how to respond. We’re always improving how we respond, but this was a major step. Volcanoes are now more closely monitored. We have a good chance now of determining when a volcano becomes restless. A lahar detection and warning systems have been set up on several rivers draining Mount Rainier.

Ash impact
Mack produced about a half-dozen papers related to the impact of the ash fall on native plants. He wasn’t planning on it, but it became “a significant part of my research for at least five years,” says Mack, who came to WSU in 1975 and reached emeritus status in 2015. He found the region’s cryptobiotic crust—composed of mosses, lichens, liverworts, and algae—died in the cover of ash. But they recolonized very quickly, within 12 to 18 months. “It was not a lasting effect but it was a major effect,” he says.

Mack also studied mouse runs in the field, finding that green algae grew successfully in the nitrogen-rich paths made by mice excretions. “It showed a phenomena we weren’t aware of before—because these ‘mouse runways’ were created atop the white ash,” he says. “Without the masking of the litter and soil, we could see the algae as never before.”

Plant life
After Mount St. Helens erupted, “everything was gray scale,” says biology professor John Bishop, associate dean and interim co-academic director of the College of Arts and Sciences at WSU Vancouver. “A huge area was sterile. There was nothing there—nothing alive, nothing dead. There was no biological legacy left. Plants, animals, insects, microbes, organic matter—it was all burned or blown away or buried by rock. You have this extreme environment, this massive area that’s been disturbed.”

Two years after the eruption, a single pioneering lupine plant was found, circled by seedlings, on the Pumice Plain—much to the surprise of ecologists. “Lupine has a magic trick,” says Bishop, who’s been studying Mount St. Helens since 1990 and keeps a piece of pumice on a shelf in his office. “When phosphorous is trapped in minerals in the ground, they create a special root. It’s like they’re mining it. They’re one of the heroes of the story.”

Lupines, self-fertilizing and members of the legume family, add nitrogen and organic matter to the ash, creating soils and helping other plants grow. By 2007, about 40 percent of the Pumice Plain was covered with plant growth and the number of species was multiplying. Immediately following the eruption, there was zero life. By 2007, some 78 different species were counted. By 2013, the number of species totaled 137. In 2016, it was 155. “There is actually a lot of biodiversity out there,” says Bishop, whose team helps monitor a series of 175 permanent survey plots for WSU. And lupine, once the most prolific on the Pumice Plain and vital to its regrowth, has since been surpassed. “Lupine was first, but now there is actually more moss,” Bishop says. “Lupine is in second place.”

Bishop found their numbers kept climbing and crashing, and that insects—particularly caterpillars—were living in the roots of lupine plants, eating their seeds, and preventing them from spreading quickly. He also found an invasive species of weevils has a penchant for the Sitka willow, burrowing in its stems and restricting growth. His work was among the first examples of herbivores controlling revegetation.

He’s made the trek to the Pumice Plain every summer since 1990, logging some 20 to 30 days on the mountain for field research each year and bringing students from WSU Vancouver’s biology, environmental science, and natural resource science programs. “This is a special place,” Bishop says. “And it’s spectacular in summer.”

Watch Bishop on PBS Newshour in 2016.

Long-lasting effects
“Another very important lesson is the effects of such eruptions are long-lasting,” Swanson says. “They’re still with us. The sediment load in the Toutle River is much higher than it was in 1980. The forest was denuded. The immediate impact of the eruption is somewhat short-lived, but the long-term impact can last for decades.”

Ray Yurkewycz (’10 MS Env. Sci.), executive director of the Mount St. Helens Institute, notes geological and ecological time differs from the human experience of time. “One lesson is that there are lot things that happen more quickly and more slowly than you would expect,” he says. “We’re bounded by the time frame that we have. As humans, we think 40 years is a long time. Our time is tied into our life expectancy. We live 70 to 80 years. Geology and ecology occurs at different time scales, both shorter and longer than the human experience. For instance, some life forms come back right away. Others take decades or longer. It’s a reminder of the scale of things.”

More recently, “the mountain goat populations have soared.” Some 400 mountain goats now live on or around Mount St. Helens, he says. “They’ve started to return on their own—and are thriving.”

Read the full article at Washington State Magazine to learn more about, ash behavior, Spirit Lake today, and the impact of tourism and future plans on the Mount St. Helens National Volcano Monument.