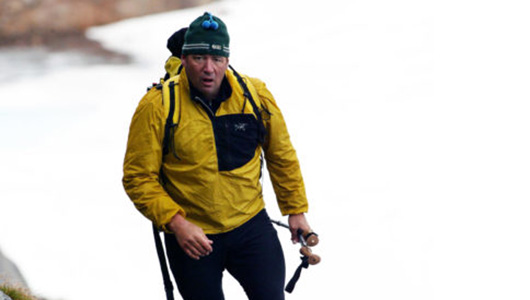 Buddy Levy, a longtime clinical professor in English, likes to make the trip.

He specializes in historical narrative, paying meticulous attention to detail, writing cinematically, and traveling to the sites of the stories he’s researching—sometimes several hundred years after they’ve occurred. Travel, he says, is necessary for scene-setting and description, and can be more meaningful than archival research.

His seventh book, Labyrinth of Ice, started with a visit to Greenland in 2003. But he was there to write about something else. Levy was covering a race in which Erik Weihenmayer, the first blind man to summit Mount Everest, was competing, and he managed to convince Weihenmayer to let him tag along for a couple hundred miles while Weihenmayer and his crew made their way across freezing fjords and mountains. That experience led to co-writing No Barriers: A Blind Man’s Journey to Kayak the Grand Canyon as well as helping write the 2018 award-winning film The Weight of Water which also documented the paddle.

Meantime, other books and adventures materialized. Levy trekked through the jungle to the Pass of Cortes to tell the story of Conquistador: Hernan Cortes, King Montezuma, and the Last Stand of the Aztecs. He hiked from Quito, Ecuador, over the Andes to the Amazon River, which he paddled in a dugout canoe for River of Darkness: Francisco Orellana’s Legendary Voyage of Death and Discovery Down the Amazon. He co-wrote Geronimo: Leadership Strategies of an American Warrior with former WSU head football coach Mike Leach. And, for two seasons, he served as a sleuth on Brad Meltzer’s Decoded on the History Channel, investigating historical enigmas throughout the United States and Europe.

He also had class. Levy teaches creative non-fiction, fiction, screen writing, and technical and professional writing at WSU Pullman. His other books have pursued chukar partridges (Echoes on Rimrock) and traced the life of frontiersman David Crockett (American Legend).

More than a decade after he traveled to Greenland, he was finally able to delve deeply into the Greely Expedition, spending two years researching and writing his latest historical narrative.

Here, he talks about his strategies for crafting a compelling story:

What’s the key to writing a good narrative? A key to writing a good narrative is figuring out where the tension lies. I like to get to the heart of the drama as soon as possible. There’s more than one key, though. Another is figuring out what’s at stake for each of the characters, and those things aren’t always the same. What are they trying for, and what are the impediments to what they are trying for? In the case of Labyrinth of Ice, the landscape itself was a major challenge. So were the elements. There’s also internal conflict. And then there’s understanding the entire story and its context—and that requires a whole lot of research. You don’t want to leave out the parts that are critical to the story. But you do need to pare it down. For example (in Labyrinth of Ice), you can summarize the (political) proceedings in a paragraph and get to the part where the ships sail or don’t sail. And it does have to have that dramatic arc. I try to think like a movie. Each scene would be a chapter with miniature arcs. Outlining allows you to isolate them.

How did you become interested in historical nonfiction adventurer stories? I grew up in Sun Valley, Idaho. It was mountainous and a remote location in the 1970s. I had been introduced by my father to the stories of Jack London. And, in the early to mid ‘70s, I read a magazine piece about a guy who got stranded by a blizzard up Muldoon Canyon, about 30 miles away, in winter. It was called Survival in Muldoon Canyon or something like that, and I was riveted by it. I couldn’t believe how gnarly it was. There was frostbite and hunger and hypothermia—I LOVED it!

What keeps you drawn you to them? You have this giant story for which you know the beginning, middle, and end. How do you keep the reader on the edge of their seat? How do you end chapters that leave them wanting more? That’s the fun part, the craft of it.

What elements do you look for when choosing a subject for a book-length project? I like events that are compressed within a short period of time, maybe a couple of years long. I gravitate toward that time frame. And I guess I’m drawn to life and death, and events that are paradigm-shifting. With Conquistador, you’re talking about two civilizations meeting for the first time in history. It’s a moment in history when things are never going to be the same. I’m drawn to things that have very high stakes—not only for the participants but for history.

Talk about your process. How do you go about researching and writing your books? Normally, when I come up with a project I write a pretty extensive proposal. Then I go to the place (where the story is set) to know what it’s like on the ground even if it’s nearly 500 years later–which was the case with Conquistador. I spent three weeks going down the Amazon when I was researching River of Darkness, and it was so crucial to being able to describe that experience even though I was there some 450 years after (the explorer) Francisco Orellana. For me, travel and immersion are essential. It allows the writer to experience the place in a visceral way that archival research or a library or computer cannot.

How did you learn of the Greely Expedition? I went to Greenland, and I met Erik Weihenmayer. I was embedded with his team and trekked with them. And I became fascinated with the history of Greenland. Once you start researching that, you bump into polar expeditions pretty fast. It’s interwoven. At some point, I came across the Greely Expedition. I pitched it informally to my agent. I sent him an email and said, “Hey man, I came across a pretty remarkable story.” Then, many books later, I got asked to write it.

What are you working on next? Usually, the next project has just organically occurred, sometimes through trial and error—or failure. Conquistador started as a chapter in another book that ended up not getting published. There’s an element of wanting the next book to be bigger, better, and badder, and this book (Labyrinth of Ice) is tough to follow. It’s really daunting because you want it to be right and interesting; you want it to sustain your imagination for a couple of years. That said, I’m working on another narrative nonfiction for St. Martin’s Press. Icebound tells the story of the 1913 Karluk disaster. Like Labyrinth of Ice, it’s the story of a scientific Arctic expedition that left its crew and passengers stranded on ice, fighting for survival. It’s slated for publication in 2022.