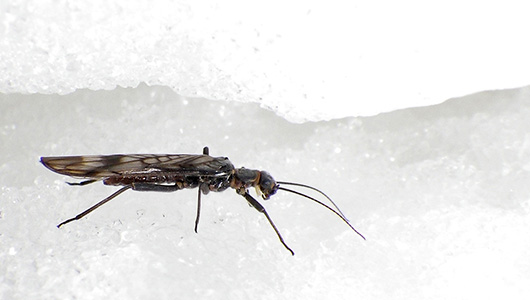 An endangered aquatic insect that lives in icy streams fed by glaciers might not mind if the water grows warmer due to climate change.

While the study goes against the prevailing theory that rising water temperatures will be devastating for the glacial stream insects, Hotaling said this does not mean that global warming will be a win for mountain stoneflies.

“These species are likely still very much in peril,” said Hotaling. “They live in these extreme areas for a reason. The problem is we don’t fully understand what that reason is yet. The threats from warming and the loss of glaciers are likely more complicated, and potentially, it is not about physical factors. It might be about ecological factors.”

In the study, published in Global Change Biology, Hotaling and his colleagues tested the thermal tolerance levels of several species of mountain stoneflies found in the Rocky Mountains, including Lednia tumana, which was listed under the U.S. Endangered Species Act in November 2019 due to the rapid loss of its glacial habitat.

The researchers collected larval specimens of the stoneflies from streams in Glacier and Grand Teton national parks. They then subjected some of the flies to increasingly warmer water temperatures. All of the species had a maximum tolerance of more than 20 degrees Celsius (68 Fahrenheit), which is well above their normal range of below 10 degrees Celsius (50 Fahrenheit).

In this study, the researchers found these same proteins were expressed not only by stoneflies exposed to heat but also by those that were held at 3 degrees Celsius (37.4 Fahrenheit), a similar temperature to their normal conditions, indicating mountain stoneflies might be stressed in their usual cold temperature environments.

The study’s findings raise a lot of questions, including why these insects are not found in warmer waters currently, said co-lead author Alisha Shah, a post-doctoral researcher from University of Montana.

“It is possible that these mountain stoneflies are just bad competitors, and they are pushed up to these higher elevations by stronger competitors who prefer somewhat warmer temperatures,” said Shah.

The researchers tested the flies’ ability to tolerate short-term spikes of temperature, imitating what might happen to a stream on a hot summer day. Hotaling and Shah are now investigating how stoneflies respond to living in warmer water for longer periods. So far, the stonefly nymphs appear to develop faster. Shah said it was hard to tell yet if that was good or bad for the stoneflies overall since faster development might mean they have more deformities or fewer eggs.

Hotaling and Shah are investigating these variables in a race to better understand the cold communities that live downstream of glaciers before they disappear.

“We’re stuck between having so little knowledge about the ecology and physiology of what lives on or downstream of glaciers and having so little time,” Hotaling said. “These are some of the most rapidly changing places on the planet, so the time we have to understand them is ticking by very quickly.”