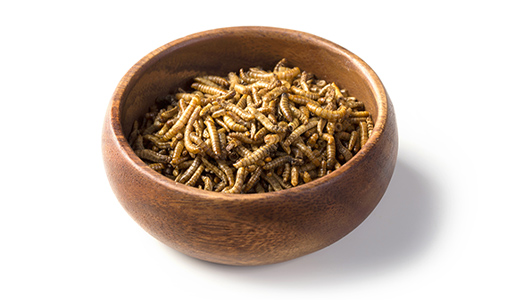 Brenden Campbell, a master’s student in the School of the Environment, won recognition from the Comparative Nutrition Society for virtually presenting research on a recently discovered ability in mealworms. In his WSU undergraduate honors research project, Campbell found that the larvae can safely eat polystyrene waste, discarded polymers better known by their trade name of Styrofoam.

At the society’s virtual conference in summer 2020, Campbell received the Best Poster Oral and Q&A Award for his poster presentation, “Mealworms and Humans: Nutrient Analysis and Potential Bioremediation of Polystyrene.”

In 2015, researchers at Stanford University documented that mealworms have the ability to break down polystyrene, a major component of U.S. landfills.

“The initial Stanford experiment was an inspiration to me, and the reason I started this study,” Campbell said. “I wanted to look at this from a food angle and explore the possibilities.”

Insects aren’t typically on American dinner menus. But in Asia, beetle larvae called mealworms have long been a useful, environmentally sustainable source of protein, and are growing in popularity as the world population grows.

Delving into mealworms’ consumption of polystyrene, he set out to determine how the polymer affects the insect’s nutritional value, including whether the toxic component styrene is deposited in the larvae’s bodies—which could potentially harm the health of people and animals who eat them.

Campbell found that a polystyrene diet alone is not nutritious enough for mealworms, who started eating each other in the absence of other food. He added an extra food source—chicken feed—which boosted mealworm nutrition and increased their consumption of the polymer waste. Infrared analysis showed that the insects were able to break down the toxic styrene compounds, making them safe to eat.

Competition judges appreciated how Campbell replicated a previous study and then took it a step further, and praised his ability to discuss and answer questions about the research.

The award, which included a cash prize, generated fresh interest in his research topic, and sparked conversations with private companies about putting Campbell’s ideas into practice in Washington state.

“I hope that what I did can inspire others to iterate and try out their ideas,” he said.

The Comparative Nutrition Society fosters communication among scientists with interests in comparative nutrition, the discipline that compares nutritional similarities and differences in animals.

Campbell is advised by Allyson Beall King, associate director of undergraduate studies in the School of the Environment, and Nancy Irlbeck, an associate professor and comparative nutritionist in the Department of Animal Sciences. He earned his undergraduate degree in environmental science from WSU in spring 2020.

Top photo: Mealworms in a bowl (image provided by CAHNRS).

By Seth Truscott for CAHNRS News and WSU Insider.