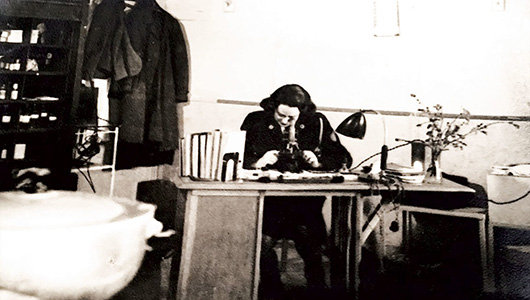 For many years, she never spoke about World War II.  “It was too difficult. You try to forget. You try to go on with life.”

But by the time 91-year-old Carla Olman Peperzak met Raymond Sun, a WSU associate professor of history, the former teenage operative in the Dutch Resistance had dedicated the rest of her life to telling her story.

“Her generation is disappearing very, very rapidly,” Sun says. “We’re really running out of these witnesses. There’s some sense of urgency to capture their stories as a powerful means to teach.”

Sun specializes in Holocaust and genocide studies and modern German and military history. He also studies how war affects societies and how societies remember war. He’s particularly interested in examining resistance and resilience.

He first read about Peperzak’s Underground work in 2015 ago in The Spokesman-Review and arranged for her to speak to his World War II history class. Now he’s working on weaving her wartime narrative into a manuscript that explores the history of Dutch Jews as well as gender roles—particularly women’s—during World War II.

In the meantime, he has a chapter about Peperzak—tentatively titled “Hiding in Plain Sight: Gender, Faith, and the Conflicted Legacies of a Dutch Rescuer”—due this spring for a forthcoming compilation organized by the Finkler Institute of Holocaust Research at Bar Ilan University together with the B’nai B’rith World Organization.

Stories like Peperzak’s, he says, “make it so much easier to understand the big picture.”

He began interviewing Peperzak, a member of the speaker’s bureau for Seattle’s Holocaust Center for Humanity, in 2016. He has since incorporated her experiences into his research, presented scholarly papers on her Resistance work at conferences, and appeared with her on stage for Q&A sessions.

“I’ve looked a lot at the perpetrators, the bad guys,” he says. “Her story really got me into looking at the people who rescued or helped Jews.”

Her father managed to procure paperwork identifying his wife and two daughters as non-Jewish. “I know it cost him a lot of money,” says Peperzak, who didn’t tell her parents or sister about her Resistance work. “I got a new ID. I didn’t have to wear the star, and that gave me so much more freedom. I was grateful. I wanted to help people.”

She enrolled in a private medical technology college and started her practicum in a local hospital, where she stole a German medical identity card and bought a German nurse’s uniform from a colleague. Both—along with her bicycle—became important to her Resistance work. Often posing as a German nurse and pedaling as far as The Hague—about 40 miles away—she helped hide Jews in attics, basements, and barns in rural Holland.

She also checked on her charges—many of whom were friends or extended family members—bringing food, medical supplies, stolen ration cards, and identity cards that she forged. “I made about 100 false ID cards,” she says. “I was pretty good at it.”

She was also good at hiding in plain sight. She was young, attractive, and fluent in German, which she had learned in school as well as from her Austrian nanny. When she was stopped by German soldiers, she says, “I flirted with them. I’m not a flirt normally, but I flirted with them. I was the right age. And it got me out of some sticky situations.”

“She’s 18 to 21 years old when she’s doing this,” Sun says. “She’s this young woman, taking her life into her hands and making decisions that I’ve never had to make—that most of us have never had to make in our entire lives. She’s doing this out in the open. These were gendered experiences. What she could do as a woman—because she was a woman—was very different from a man.”

Holland had one of Western Europe’s highest Jewish death rates in World War II, which ended 75 years ago in the European Theater. The Allies accepted Germany’s surrender May 8, 1945. Roughly a quarter, or about 35,000 Jews, survived. In all, some 6 million Jews—including about 75 percent of Peperzak’s family, about 18 people in all—were exterminated.

She broke her silence after her granddaughter asked her to speak at her school. Since then, she’s shared her story from Seattle and Tacoma to Pullman, and points in between. She’s also finished a memoir, Keys of My Life, available on Amazon.

In 2015, Washington legislature’s Resolution 8623 honored her “as a selfless and brave hero, who saved the lives of many and is now using her experiences to speak to new generations and educate us all about our history and the human capacity to care for others while facing unimaginably difficult challenges.”

But, she says, “I don’t consider myself a hero. I could help, so I helped. I did what I could do.”

Read the full story about Peperzak and her Underground activities in Washington State Magazine.

Top image: Carla Olman Peperzak works as a medical officer a few months after the war.