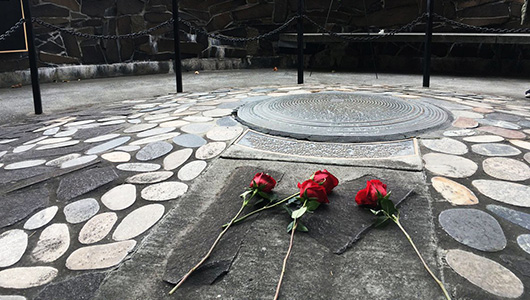 They were husbands, fathers, sons, brothers. One was a standout college athlete and beloved coach. A couple were pilots. A few quit school to serve. Some were never found.

These seven servicemen are a handful of nearly 260 military personnel with ties to WSU who made the ultimate sacrifice during World War II. Now, 75 years after the end of the war, the stories of the men and women who didn’t make it back are being compiled by a small cohort of faculty and students in the Department of History.

The Fallen Cougars Project will celebrate the University’s World War II fatalities with an online memorial detailing their early lives, time at Washington State College, military missions, and deaths in the line of duty.

“It’s really important to me that we recapture the people behind the names,” says associate history professor Raymond “Ray” Sun, who started the project. “They are meaningful members of Cougar nation, just like recent graduates or athletes or scholarship winners. If you go to the WSU Veterans Memorial, you see their names but you don’t know anything about the people who those names represent. That’s the primary motivation: to make these names come to life again.”

Sun aims to make the stories of WSU’s World War II dead accessible to the public and maybe even inspire similar projects. “It would be great to collaborate with other schools in the region or even across the country to build a network of digital exhibits,” says Sun, who leads the effort in collaboration with Trevor Bond, director of the WSU Manuscripts, Archives, and Special Collections (MASC).

University archivist Mark O’English as well as several graduate and undergraduate students are helping with the research, funded by grants and fellowships from the WSU Center for Arts and Humanities, MASC’s Lawrence Stark Graduate Fellowship, and William D. Aiken Memorial Fund.

A fellowship from the Center for Digital Scholarship and Curation (CDSC) at WSU allowed Sun to create the framework for the digital exhibit. The biographies will be posted through the Mukurtu cultural archiving program managed by the CDSC, of which Bond is codirector. Last summer, due to the COVID-19 pandemic, he and O’English scanned dozens of documents for student researchers who weren’t able to access WSU Libraries in person. The students worked remotely on 25 profiles each. About two dozen had been completed before COVID-19, including several whose names are not on WSU’s memorial wall. They hope to have the project online by the end of 2021.

“I hope the project will grow organically and people will go up into their attics and come back with photos or a yearbook or letters and other memorabilia to add to the collection,” says Sun. He got the idea for the project in summer 2017 after attending the national teachers conference of the Friends of the World War II Memorial, an organization dedicated to World War II commemoration and education.

Sun had recently learned of the University’s war records through another project in collaboration with O’English and WSU’s Senior Reserve Officers’ Training Corps (ROTC) to commemorate the hundredth anniversary of the United States’ entry into World War I. The records include letters from former WSC President Ernest O. Holland to families of fallen Cougars. Holland had planned to create a booklet honoring the college’s World War II dead but died before seeing the project to fruition.

Now, Bond says, “It’s being done in a different way.”

Work on the project began in fall 2017. Sun recruited undergraduate students in his World War II history classes to start compiling biographies. He treated the project as service learning; students received credit for participating and using the knowledge they gained in class to provide context for their research. They combed through war, burial, and University records as well as copies of the Daily Evergreen and Chinook yearbooks, newspapers, websites of veterans’ organizations, and more.

They found Kirkham came from Sunnyside, Plowman went down with his plane, and Ferguson set out to rescue soldiers who were wounded during early morning patrol. Seike, a son of Japanese immigrants, enlisted at an internment camp. Carstensen took part in the first assault wave on Saipan. Hit by a mortar blast, Beinke was treated for his injuries, then went back to battle to carry out his command. And Buckley acted quickly to warn crewmates aboard their aircraft carrier of an impending kamikaze attack.

“It’s really tough stuff,” says Bond, who’s writing several of the biographies. “When you see young people at the start of great things in their lives die, it’s extra hard. I think these veterans really bring that home. I’m just grateful that the University gathered so many of these records. Many of the parents wrote with stories of how their sons died, sometimes including copies of the commendations for medals. It really does humanize the sacrifice and family toll.”