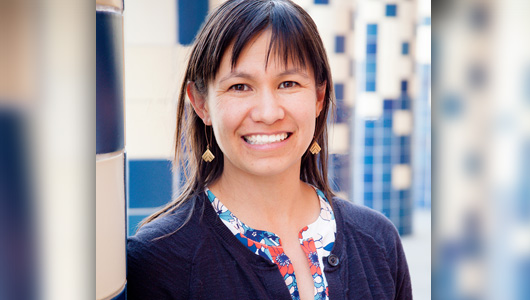 “Understanding the complex and often positive role the microbiome plays in the health of plants and animals has precipitated a real renaissance in biology,” says microbiologist Stephanie Porter, who studies the evolution of cooperation and plant–microbe symbiosis. “There’s been a blossoming of ideas due to new genomic tools for understanding this microbiome—the set of all microbes that live in and on plants and animals.”

“But there’s also been a shift in our thinking about microbes. We’ve moved from microbes being viewed strictly as the cause of diseases or that they are at best harmless, to thinking they have a lot of positive effects on plants and animals. They can help plants and animals resist diseases or tolerate environmental stress and we didn’t previously recognize this. It’s an opening of our eyes to this whole world of complexity that didn’t exist before this paradigm shift in the field.”

Symbiosis occurs when two or more species live together in close physical contact and, strictly speaking, need not be mutually beneficial. Mutualism, where species cooperate to their shared benefit, is a type of symbiosis. Some researchers argue that bees and flowers, as interdependent ecological niche mates, are symbionts. Similarly, humans and our food plants and animals are in symbiotic relationships: we need to eat them, so we give them what they need to grow to an edible state.

As biologists realize that cooperation is as important as competition or predation in the evolution and maintenance of ecological roles and niches, they are also seeing that microbes are foundational partners in the success of a huge number of life forms.

Porter and her team of collaborators, which includes other scientists as well as WSU Vancouver undergraduate research interns and graduate students, design experiments that tease out the genetics of cooperation—experiments that at the same time shed light on big evolutionary questions. Her lab is itself a kind of symbiotic relationship. Individuals from varying backgrounds bring hypotheses and design solutions to the table as they all seek answers, Porter says, to “fundamental questions about why plants and microbes cooperate.” Among other things, Porter’s group is keenly interested in understanding how cooperation lasts when, as she says, “the temptation to cheat might turn partners into enemies?”

Maintaining a healthy food supply, while minimizing the environmental and economic costs of agriculture, are motivating forces in Porter’s lab.

“Fungi and bacteria that live in plant roots perform functions that we expect, like providing nutrients to the plant, or taking up space and therefore preventing pathogens from invading the plant. But they also manipulate the hormonal and metabolic profiles of plants to make them resist all kinds of different stresses,” Porter says.

She and her team are also investigating symbiosis from the microbe’s point of view. As Porter points out, there has been lots of work on that relationship from the perspective of crop plants (including at WSU), but understanding why a microbe would go to work for a plant is a new frontier.

Even before humans had any clue that there were organisms they couldn’t see, we knew there was something in soil that made plants grow.

Porter and her research group is seeking to answer the question, “Have we compromised our crops’ ability to benefit from microbes through domestication?”

Take alfalfa, a legume grown in Greece for livestock fodder since at least the time of Herodotus. When Europeans colonized the Americas, they brought livestock and their fodder with them. But alfalfa wouldn’t grow here. Turns out, the plant was missing its ancient partner, a kind of bacteria called rhizobia.

“The Holy Grail,” Porter continues, “is identifying the ways in which crops are deficient in their ability to control symbionts,” and comparing the genetics of those plants with wild relatives that manage the relationship well by making sure cheaters don’t prosper.

Together with WSU plant pathologist Maren Friesen, Porter analyzed 87 studies in which plant-microbe relationships were experimentally manipulated. Across the studies, they saw that fungal symbionts were more important for ameliorating stress than bacteria, though both are critical for plant health. The message from that study, Porter says, “is really about the potential for improving plant health via its microbiome, especially under stress.”

The recipient of a prestigious National Science Foundation Early Career grant, Porter also studies nitrogen-fixing rhizobial bacteria, which, she says, “have an amazing ability” to insert or eject from their genomes the genes that confer symbiotic ability. The genes for symbiosis are on a large plasmid (a usually circular ring of DNA that can replicate independently of chromosomal DNA). Angeliqua Montoya (’18 Biol.), a graduate student working with Porter, calls it the “symbiosis island. It can be lost or gained—they can just kick it out if they’re feeling stressed.” When the bacterium ejects the island, it gives up on cooperation and can be ejected in turn by the plant. The bacterium is then left to dine on decaying organic matter in the soil.

Miles Roberts (’20 Biol.), an undergraduate working in Porter’s lab until his recent graduation, investigated the heavy metal-tolerant mesorhizobia before heading off to graduate school in Michigan. From the samples, he and his lab mates found that some of the bacteria are “adapted to these soils while other populations are adapted to nearby metal-poor soils.”

“Environments are highly variable and finely structured,” Roberts says. “Stand in one spot in a forest: there’s a dry patch over here, there’s a sunny patch over there” and each little patch will likely have its locals-only population of specially adapted microorganisms.

On a global scale, the myriad microbial eco-niches do form a kind of metaphorical forest—and it’s only recently that we’ve begun to discern the fine structure of the individual trees. And what we now see is that, from root to crown, these “trees,” whether humans, legumes, squids, or real trees, are engaged in struggles to survive. Struggles that, strange as it may seem to the old idea of “survival of the fittest,” are in fact often a matter of cooperation.

Adapted from “Get Together” by Brian Clark in Washington State Magazine.

Read the full feature article in the Winter 2020 issue.